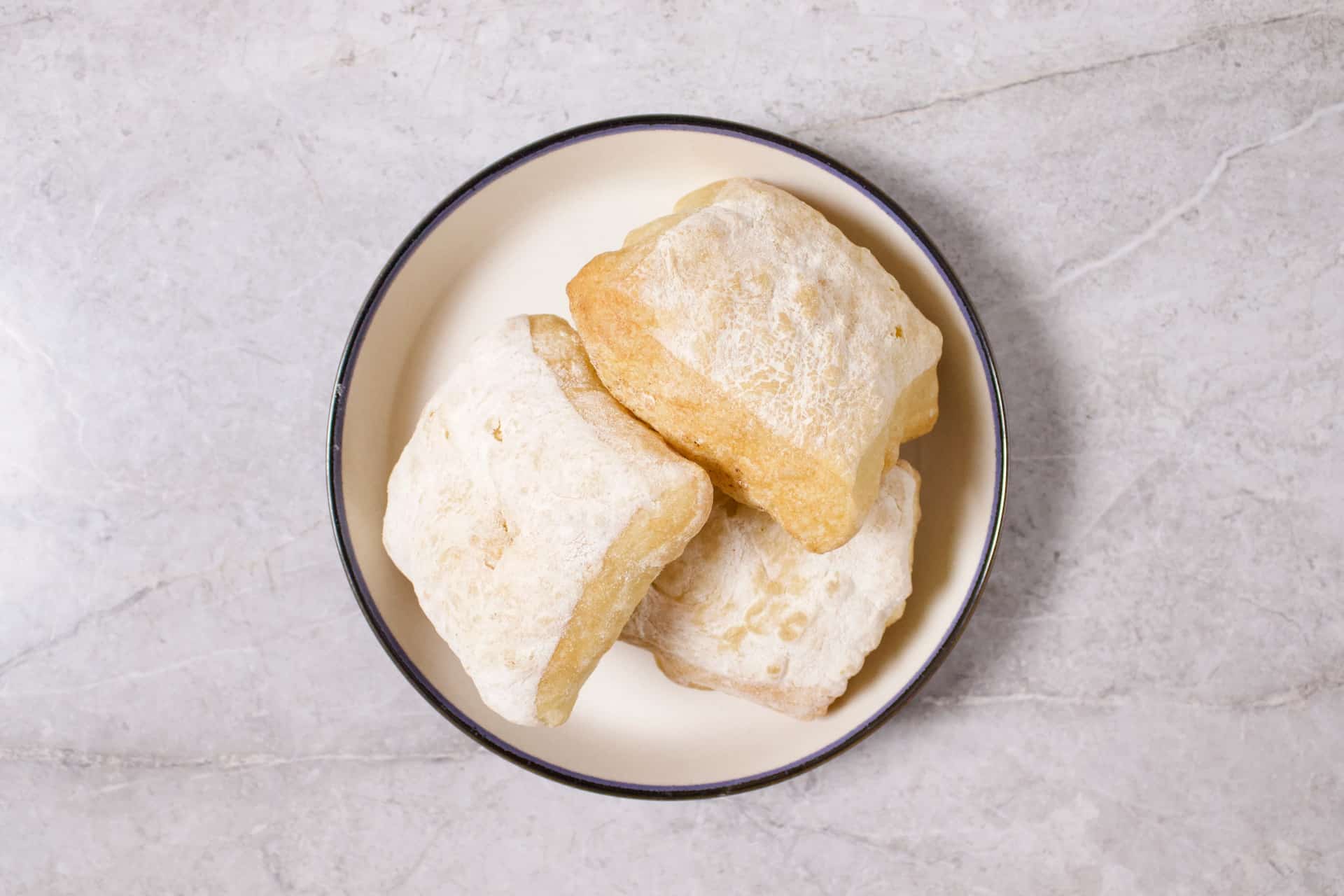 Is your ciabatta going stale in the space of hours, not days?

Maybe you’ve recently developed a ciabatta-habit but can’t quite get the bread to keep at its best for long?

In this article, I share my tried and tested methods for keeping ciabatta fresh for as long as possible (fluffy, crunchy ciabatta a few days after baking, anyone?).

I also share the results from my reheating tests to allowing you to breathe life back into your days-old ciabatta in just a couple of quick steps.

In a rush? Use these links to skip to the section you need:

I went to my local bakery and picked up some fresh ciabatta rolls (as well as a cheeky cinnamon roll) then left them overnight.

The following day, I took the slightly stale rolls and tested several different ways of reheating them to see which one gave me the softest, pillowiest roll. I also sliced a roll up and reheated the slices.

The oven gave the best results for a whole roll because it re-crusted the outside while keeping the inside fluffy.

The microwave resulted in a soft crust, but it’s great for really stale bread.

Reheating ciabatta bread in the oven

To reheat ciabatta bread in the oven, preheat it to 350°F/180°C. Then run the crust of your ciabatta under the tap to wet it and cover any cut edges with foil. Place the ciabatta on a wire rack and heat it for 5-10 minutes or longer for a big loaf.

The oven is the best way to reheat a loaf or big chunk of ciabatta bread. You end up with a soft inside and a crusty exterior. Just the way ciabatta should be.

You can also use the oven for slices, but you need to take a few precautions to stop them from drying out too much. I discuss this more later on (here).

Related: How To Heat Up Naan Bread

How to reheat ciabatta bread in the oven:

Note that 5-10 minutes is very much an approximation. The exact length of time you need to reheat your ciabatta bread will depend on the size of the piece you’re heating. A whole loaf will need a lot longer than a few slices.

I know it seems crazy to run your bread under the tap before reheating it.

But trust me, it’s the best way to create the steam that’s needed to re-hydrate the bread. If there’s no water involved, the oven will just dry your bread out.

Using a wire rack exposes the bottom of the bread to make sure you don’t end up with a soggy bottom. If you use a baking tray, you’ll need to turn the bread over for the last few minutes of heating to ensure the bottom dries off (or just avoid wetting it in the first place).

Another method you can use to create steam in an oven is to put a baking tray filled with water on the shelf below the ciabatta. The water will evaporate when it gets hot enough, filling the oven with steam.

The bread had a nice crunchy outside and a soft inside.

The roll stayed hot for quite a while too and stayed soft as the roll cooled.

Reheating ciabatta bread in the microwave

To reheat ciabatta bread in the microwave, place the ciabatta on a microwave-safe plate and cover it with a damp paper towel. Microwave slices and small bits of bread in 10 seconds increments until the bread is soft. For larger rolls and loaves, use 30-second increments.

The microwave is useful when you’re in a hurry.

The crust of your ciabatta won’t crisp up in the microwave, but the bread inside will soften.

Microwaving is a good option if you only want to reheat a few slices of bread because the oven can be too drying.

How to reheat ciabatta bread in the microwave:

The damp paper towel is really important here because it creates steam in the microwave, which penetrates the bread and re-moisturizes it.

Don’t wrap the bottom of the bread too tightly with the damp towel because you risk ending up with a soggy bottom.

If you want to crisp up the crust after the microwave, place the bread in a hot oven (400 degrees) for a few minutes.

Aim to eat the roll as soon as it comes out of the microwave because the bread will harden as it cools.

The bread was nice and soft. The only thing missing was the crunch of a crust. The crust was just as soft as the rest of the bread.

I personally don’t mind this, but some people will.

How to reheat slices of ciabatta bread

The best way to reheat sliced ciabatta bread is to cover the slices with a damp paper towel and microwave them on high for 10 seconds in the microwave. You can also put them in the toaster. I would avoid the oven because it’s too drying for slices.

If you do need to use the oven, I recommend putting the slices back together (as much as you can), sprinkling the crust lightly with water, and wrapping the whole thing tightly in aluminum foil.

You don’t want to use too much water when wrapping the bread in foil because the foil will trap all the steam. And too much trapped moisture will turn the ciabatta soggy.

You can open the foil for a few minutes before removing the bread to improve crustiness.

How to store ciabatta bread

For short-term storage (2-3 days), keep your ciabatta at room temperature. Store the ciabatta wrapped in aluminum foil in a cool, dark place. If you have a bread basket, you can put the ciabatta uncovered in there. For longer-term storage, you should freeze the ciabatta.

Room temperature is always best if you just want to keep the ciabatta bread for a few days, but there are multiple ways to protect the bread.

If your primary objective is to keep the bread as soft as possible and you don’t mind losing the crunch, wrap it tightly in something airtight.

These options minimize airflow to stop the bread from going stale but also trap moisture, so the crust becomes soft. Another potential downside to these methods is that in a humid environment, the bread may mold faster.

If you want to keep as much crust as possible, you need to allow air to circulate around the bread. Don’t keep it in something airtight.

A bread basket provides a good middle ground and aims to provide a balance between staleness and crustiness. It works by balancing humidity and airflow. There’s just enough airflow to keep the crust crunchy, but not enough that the ciabatta goes stale too quickly.

You can also try a combination of different things. For example, my friend swears by putting their bread in a paper bag inside a sandwich bag. They say it gives you the best of both worlds.

Experiment and find what works for you!

Top tip: always wait until the bread has cooled to room temperature before wrapping it in anything. Otherwise, condensation will leave you with a soggy loaf.

Can you freeze ciabatta bread?

Freezing is a great way to preserve fresh bread.

To freeze ciabatta bread, wait until at least five hours after baking, then wrap the loaf tightly in plastic wrap and put it in a freezer bag. Freeze for up to three months. If you want sliced ciabatta, slice the loaf before freezing. Slices will last for a month in the freezer.

Freezing bread halts the staling process. After thawing and reheating, the bread will be as good as new!

This gives it a chance to cool to room temperature and for any excess moisture to escape. If you freeze the ciabatta just after baking, there’ll be too much moisture and the bread will have a gummy texture when you thaw it.

Freezer burn also has the potential to ruin your ciabatta. You can protect your bread against this by wrapping it up as tightly as possible and using several layers of packaging.

You need to minimize how much air can reach your ciabatta because it’s the air that causes freezer burn.

I always double wrap my ciabatta and then put it in a reusable freezer bag with all the air squeezed out.

It’s a bad idea to thaw and re-freeze ciabatta, so unless you know for sure you’ll eat the whole loaf in one go, it’s best to slice the bread before you freeze it. You can stick parchment paper between the slices so they won’t stick together.

Related: Can You Freeze Bread Pudding

How to thaw and reheat frozen ciabatta bread

To thaw ciabatta, leave it wrapped on the counter for a few hours and reheat as usual. Or you can reheat it straight from frozen. Reheat frozen ciabatta loaves in the oven at 350°F/180°C for 30 minutes (or until the bread is soft). Slices can go straight in the toaster or microwave.

Always leave the ciabatta in its wrapping while it’s defrosting to keep in as much moisture as possible. If you unwrap the ciabatta, all the moisture will escape and you’ll be left with sad, dry ciabatta.

Thirty minutes is a guesstimate for an entire loaf, but times may vary depending on the size of your loaf.

The oven isn’t suitable for reheating slices of frozen bread because it will dry them out too much. The toaster or microwave are much better options. For the microwave, simply heat the slices of ciabatta on high until they’re soft.

There’s no need to use water or a damp cloth when you’re reheating frozen ciabatta because the moisture from thawing the bread will create enough steam.

Plan to serve your ciabatta immediately after thawing and reheating because previously frozen bread stales a lot faster than fresh bread.

Can you refrigerate ciabatta bread?

Avoid refrigerating any bread, including ciabatta bread. Refrigerating ciabatta will speed up the staling process, and you’ll end up with hard bread a lot faster than you anticipated. Staling happens fastest at temperatures between 20° and 50°F (–5° and 10°C), and a fridge sits around 40° F (4° C).

You can undo some staling by reheating the bread, but it won’t be anything like a fresh loaf.

If you think your ciabatta will go moldy before you get to use it, the best thing to do is freeze it. 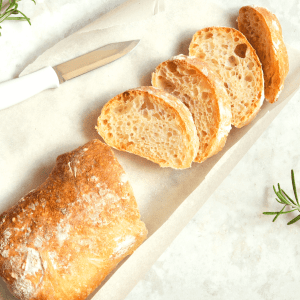 Is your ciabatta going stale in the space of hours, not days?Maybe you’ve recently developed a ciabatta-habit but can’t quite get the bread to keep at its best for long?In this recipe, I share my tried and tested methods for keeping ciabatta fresh for as long as possible (fluffy, crunchy ciabatta a few days after baking, anyone?).
No ratings yet
Print Pin Rate
Course: Side Dish
Cuisine: Italian
Keyword: ciabatta, reheat ciabatta, store ciabatta
Prep Time: 5 minutes
Cook Time: 10 minutes
Total Time: 15 minutes
Servings: 1 person
Calories: 229kcal