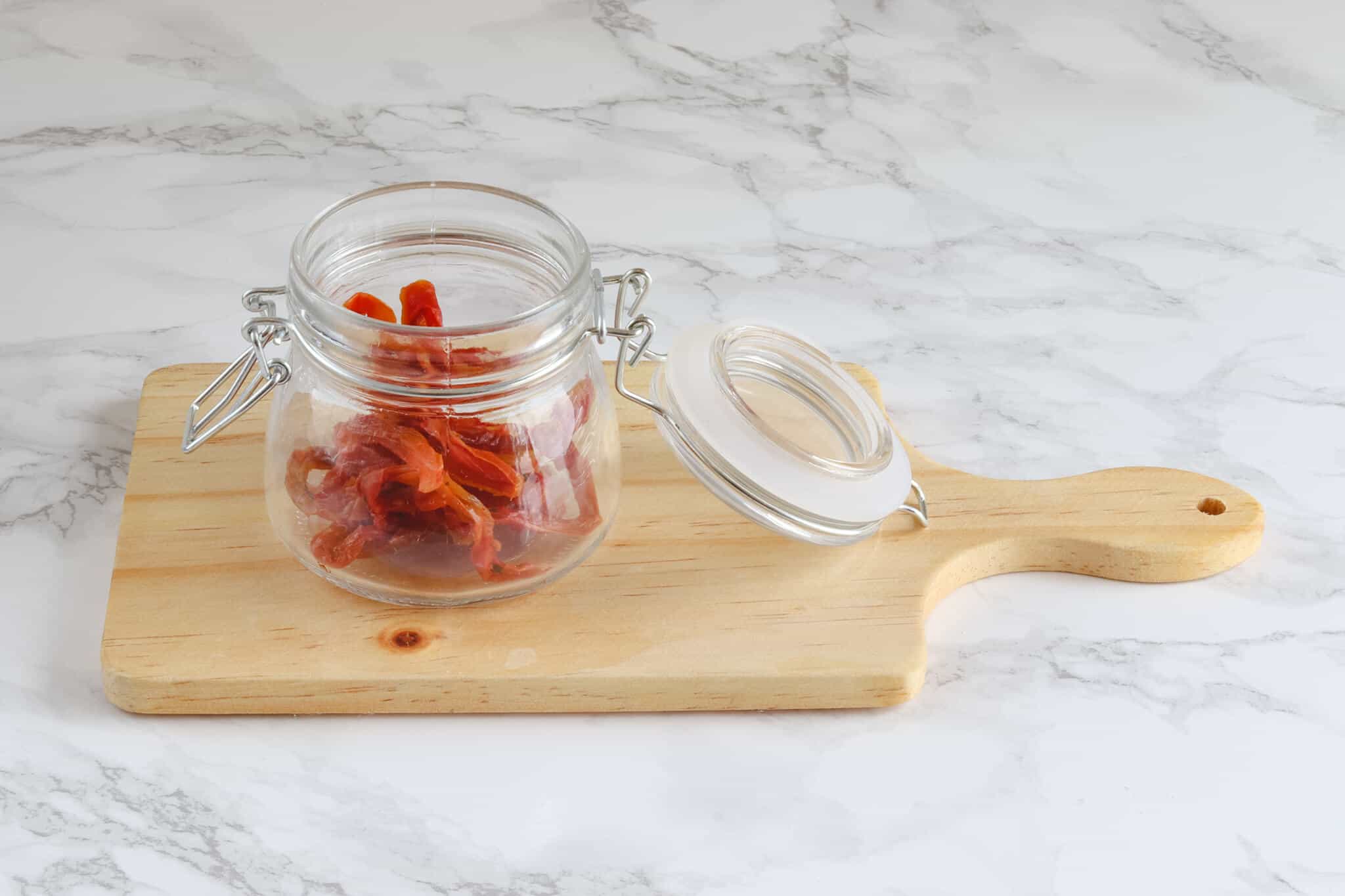 Drying foods helps to preserve them by removing most of the moisture. Without moisture, food can no longer spoil or go bad.

If you grow tomatoes, dehydrating them and storing them is a great way to make sure your harvest lasts all through winter. Plus, they’re delicious!

The conditioning process also helps to evenly distribute any remaining moisture throughout the tomatoes. Drier tomatoes will absorb moisture from the wetter tomatoes until they all have the same moisture level. This prevents premature molding.

After conditioning the tomatoes you can decide how best to store them. There are several options that I’ll cover in this article, including storing them in oil, freezing them, or even turning them into tomato powder.

How to store dehydrated tomatoes in oil

Storing tomatoes in oil means that mold is less likely to develop because there’s a lot less oxygen available.

Other advantages of keeping the tomatoes in oil are that they’re ready to use straight from the packet and don’t require hydrating. Also, you can add extra flavorings to the oil such as garlic and herbs (highly recommended!).

To store your dehydrated tomatoes in oil safely, follow these steps.

When you need to use the tomatoes, take them out of the fridge and wait for the oil to liquefy. Remove the tomatoes you want and then top up the oil if necessary to keep the remaining tomatoes covered. Once done, put the tomatoes back in the fridge.

You can use the oil in salad dressings or to fry things. That way, nothing goes to waste.

How long can you keep dehydrated tomatoes in oil?

If the tomatoes are packed without any extra seasoning or flavoring then you can keep them in the fridge for up to 3 weeks. The same time frame applies if you’ve added dried seasonings like dried herbs or peppercorns.

If you’ve added any fresh ingredients like garlic or fresh herbs then the tomatoes will only keep for 4 days in the fridge.

If you want to keep the tomatoes-in-oil for longer, you can freeze them keeping them good for up to a year with both fresh and dried seasonings.

There’s some controversy around storing tomatoes in oil due to the risk of Clostridium botulinum. Clostridium botulinum is an anaerobic bacterium that, if ingested, can cause Botulism. A severe strain of food poisoning. The risk is extremely small. But due to this risk, the National Center for Home Food Preservation advises against preserving dehydrated tomatoes in oil.

Having said that, some resources suggest that is is perfectly safe to store dehydrated tomatoes in oil, even at room temperature.

Fresh tomatoes are borderline acidic with a pH ranging from 4.3-4.9. This pH puts them in the danger zone for Botulism. When the tomato is dried, the acidity is concentrated, and the pH ends up somewhere around 4. A pH of 4 means there’s an extremely low risk of any Clostridium botulinum growing, as long as the tomatoes are sufficiently dehydrated.

Plum tomatoes are the most commonly used tomatoes for sun drying or dehydrating. A study in Food Science and Nutrition found that the pH of dehydrated plum tomatoes varied from 4.19-4.24 depending on drying temperature. Well outside the danger zone.

‘Because of their acidity, unseasoned (i.e., no vegetables or herbs) fully dried tomatoes may be safely stored in oil at room temperature.’

When it comes to flavorings, the article also says that you can mix the dried tomatoes with dried seasonings like herbs and garlic and still store them at room temperature.

But if you mix any fresh seasonings in, especially fresh garlic and herbs, then you must refrigerate the mixture and use it within four days. Or you can freeze it for longer-term storage. Fresh garlic and herbs are low-acid foods that contain water and present the perfect conditions for the replication of Clostridium botulinum.

You might be wondering why, despite all the controversy, most sundried tomatoes you’ll see in the store come packaged in oil. Commercially packed tomatoes are acidifed to ensure consumers’ safety. You can do this at home with your tomatoes by dipping them in vinegar or lemon juice before storing them.

Since there are some inconsistencies with the advice given, if you prefer to be on the safe side, I would avoid storing your tomatoes in oil and instead store them dry.

But if you’re sure your tomatoes are sufficiently dried and you haven’t added any fresh flavorings, then there’s minimal risk involved with storing them in oil. Especially if you’ve added extra acid.

How to store dehydrated tomatoes without oil

You can also store dehydrated tomatoes without submerging them in oil.

If your tomatoes are completely dry and moisture-free, you can keep them in a sealed container at room temperature for up to a year. You should pick the smallest container you can that will fit all your tomatoes. This minimizes air contact and helps prolong the shelf life of the dehydrated tomatoes by preventing them from reabsorbing any moisture.

If you’re using a plastic bag for storage, make sure to squeeze as much air out of it as possible. Or even better, use a vacuum sealer to do the hard work for you.

Most dehydrated tomatoes will not be totally moisture-free and run the risk of mold developing if you store them at room temperature.

If you want a really strong flavour you could even rehydrate the tomatoes using tomato juice.

How to store leftover rehydrated tomatoes

If you have any leftover tomatoes after rehydrating them, you can refrigerate them for up to 3 days. Or, cover them with oil and keep them for refrigerated for up to 2 weeks.

Can you freeze dehydrated tomatoes?

Dehydrated and sun dried tomatoes are suitable for home freezing.

To freeze dehydrated tomatoes that you’re keeping dry (i.e. not adding oil), place them in an airtight container. Pack them as tightly as possible or vacuum seal if you’re using a bag. In the freezer, overexposure to cold air can cause freezer burn, which will ruin the texture and flavor of your tomatoes.

Date the container and then put the tomatoes in the freezer where they’ll stay at their best for up to 18 months.

If you want to make sure none of the tomatoes stick together as they freeze, you can pre-freeze them. Lay all the tomatoes out on a baking tray and put them in the freezer for 2 hours. At this point, they’ll be frozen enough to be put into a larger container and not stick together.

You can also freeze dried tomatoes that you’re storing in oil.

If you want, you can use the pre-freeze technique described above, but it’s a little tricker with oil involved.

Spoon each tomato out and lay them on a baking tray lined with parchment paper. Each tomato will have a little pool of oil surrounding it. Do your best to make sure these don’t touch. The put the baking tray in the freezer for two hours. The oil will solidify, and you can transfer the tomatoes to a larger storage container.

The uneven shapes created by the oil puddles mean that you can’t fit as many tomatoes into one container as normal. I prefer to portion out the tomatoes and oil beforehand, then place the portions into individual freezer-safe bags to be frozen separately.

The tomatoes-in-oil will last for up to a year in the freezer before their quality starts to deteriorate. Don’t forget to date the container.

Whether dried tomatoes go bad or not depends on how much moisture they still contain. If the tomatoes are completely dry and stored correctly, they won’t spoil or grow mold. The only thing that will happen is that they may become hard and brittle over time. You can fix this by soaking them in water before you use them.

However, any drop of moisture left in the tomatoes has the potential to cause mold. This is why it’s best to store dehydrated tomatoes in the fridge. The cold temperatures inhibit bacteria from forming and protect your dried tomatoes even if there is some residual moisture you weren’t aware of.

Tomatoes stored in oil are devoid of oxygen and unlikely to go bad. But the oil can become rancid, which will ruin the taste of the tomatoes.

Exposure to oxygen, light, and heat all increase the likelihood of oil becoming rancid. Keeping the oil in the fridge increases its shelf life.

Rancid oil isn’t unsafe to eat, but it doesn’t taste good. To check whether the oil surrounding your tomatoes has gone off, smell it. Rancid oil has quite a pungent smell. If it doesn’t smell normal, throw it out.

Other ways to preserve tomatoes

If you have a ton of tomatoes and don’t want to dehydrate them all, here are some other ways you can preserve them.

What’s the difference between sundried tomatoes and dehydrated tomatoes?

Sundried tomatoes are more traditional, but the climate needs to be just right for it to work. You need hot temperatures during the day but cooler temperatures at night. In America, the only place with a suitable climate for making sun-dried tomatoes is in California.

Most Americans will have to use the more modern technique of dehydrating. You can dry the tomatoes in the oven or use a dedicated dehydrator. I prefer to use a dehydrator because there’s no chance of the tomatoes burning. In the oven, it’s easy to cook the tomatoes rather than dry them.

No matter how you dry them, the end result is the same. How you store the tomatoes is also the same. The storage instructions in this article apply to both sundried and dehydrated tomatoes.

Read Next: How To Store Kale Chips 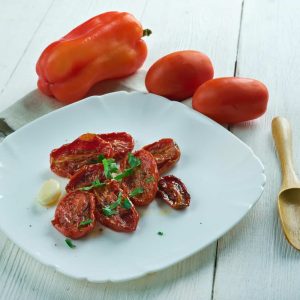 How To Store Dehydrated Tomatoes

To store dehydrated tomatoes, put them in an airtight container in the refrigerator. They'll last up to 18 months. Alternatively, you can cover the tomatoes with oil and keep them in a sealed jar in the refrigerator. In oil, the tomatoes will stay supple, but won't last as long.
5 from 2 votes
Print Pin Rate
Course: Snack
Cuisine: Mediterranean
Keyword: dehydrated tomatoes, tomatoes
Prep Time: 5 minutes
Cook Time: 0 minutes
Total Time: 5 minutes
Servings: 1 person
Calories: 100kcal 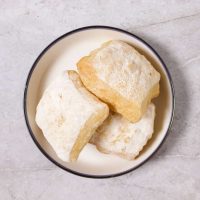 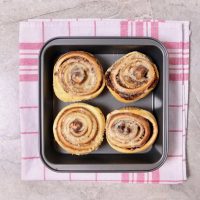 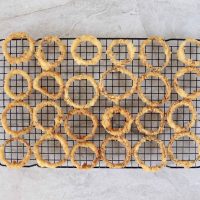 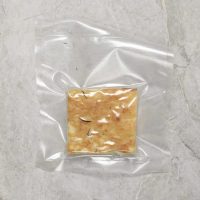