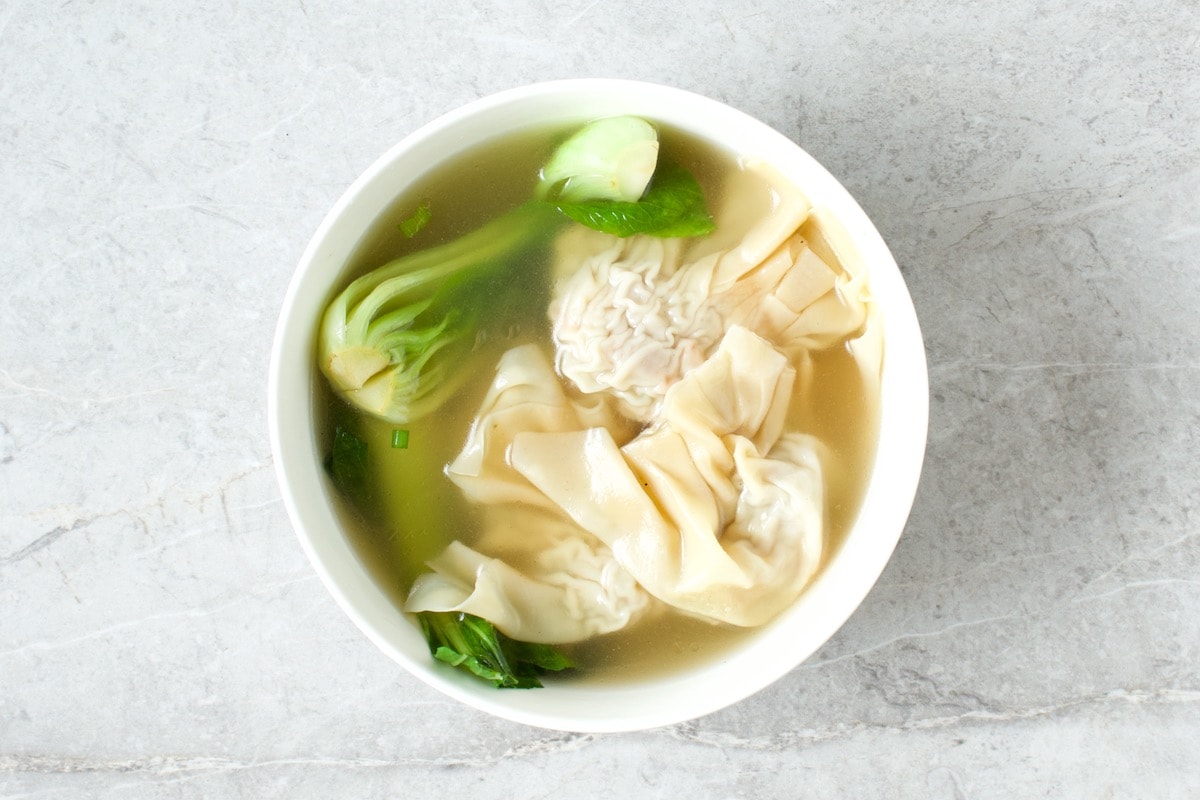 Have you been a little too enthusiastic with your wonton soup order and ended up with too much?

A rich, flavorful, slightly salty broth laced with tender, meaty wontons is my idea of heaven.

And there’s no reason to let uneaten portions go to waste.

In this article, I take you through two different ways to reheat wonton soup that won’t sacrifice its flavor or texture.

I’ll also provide you with some tips on how best to store your wonton soup.

Last weekend I ordered a large serving of wonton soup and kept some overnight for my reheating experiments.

My goal was to determine how to retain all of the soup’s flavors without overcooking the wontons or ending up with cold fillings.

I was happy to find that both methods worked well, as long as I removed the wontons and reheated the broth on its own first.

On the stove, it’s a little easier to control the temperatures of your soup and reheat large portions, but the microwave is perfect if you’re in a hurry.

Reheating wonton soup on the stove

Remove any wontons, noodles, and vegetables from the soup and set them aside. Place your desired portion of broth in a pot and heat it on medium until it starts boiling. Return your wontons (plus any noodles or vegetables) to the broth for a minute or two at the end to warm up.

Adding some crisp new garnish before serving will help give the illusion of freshness.

How to reheat wonton soup on the stove:

Adding your wontons right at the end of reheating prevents them from overcooking and falling apart.

If your wontons are big, you can pop them in the microwave for 10 to 20 seconds before placing them back in the hot soup.

This will ensure they heat all the way through to their centers.

This method works perfectly for bringing wonton soup back to life, especially if you add some fresh greens and a nice garnish.

It’s a little slower than the microwave, but I thought the flavors were more vibrant.

Reheating wonton soup in the microwave

Remove any wontons, noodles, and vegetables from the broth and set them aside. Place your broth in a microwave-safe bowl and cover it with plastic wrap or a splatter guard. Heat for 1-2 minutes until the broth is near boiling. Add back the wontons (plus any noodles or veg) and heat for 15-30 seconds.

As with the previous method, you can add some fresh garnish to reinvigorate the soup.

How to reheat wonton soup in the microwave:

If your wontons seem a bit mushy, you can microwave them separately instead to minimize the amount of time they’re in the broth.

Spread them out on a microwave-safe plate and cover them with a piece of damp paper towel.

Heat for 30 to 60 seconds and add them to the broth just before serving.

You can check if the wonton fillings are warmed through by inserting a toothpick and feeling how warm it is when you pull it out.

This method is quick and delivers great-tasting results with minimal fuss.

However, I wouldn’t recommend this for more than a single portion.

How to store wonton soup

Wonton soup will keep in the fridge for up to 4 days. To store it, separate the wontons and any noodles from the soup as soon as possible. Let everything cool to room temperature before storing the liquid and solid components in separate airtight containers.

It’s important to separate your wontons from the broth, or they’ll turn soggy from soaking up too much of the soup.

Noodles and veggies also tend to soften up from prolonged resting in liquid.

Top tip: toss the noodles in a little bit of oil before storing them if you don’t want them to stick together.

If you have a lot of broth and it will take too long to cool down, you can speed the process up by placing the pot in a sink full of cold water.

Or put the broth in lots of smaller containers. Smaller portions will cool down quicker.

Can you freeze wonton soup?

How to freeze wonton soup:

*I prefer freezer bags because you can lay them flat in the freezer and stack them to save space.

To freeze your uncooked wontons: lay them out of a baking tray lined with parchment paper and flash freeze them for 2-3 hours. Then transfer them to a freezer bag with all the air removed.

Vacuum seal or remove the air from the bag by immersing it in water before sealing (this pushes excess air out).

To thaw wonton soup broth, allow it to stand overnight in the fridge, run it under warm water, or simply reheat it from frozen.

How to reheat frozen wonton soup

You can reheat wonton soup straight from frozen by placing it in a pot on the stove or popping it in the microwave. Use medium-low heat and stir occasionally until the broth is liquid. Then you can use more heat or power. Cook fresh wontons and vegetables to add to your broth.

Don’t forget to add some crispy garnish to top it off! 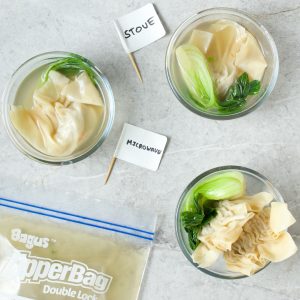 How To Reheat Wonton Soup

Adding your wontons right at the end of reheating prevents them from overcooking and falling apart. If your wontons are big, you can pop them in the microwave for 10 to 20 seconds before placing them back in the hot soup. This will ensure they heat all the way through to their centers.