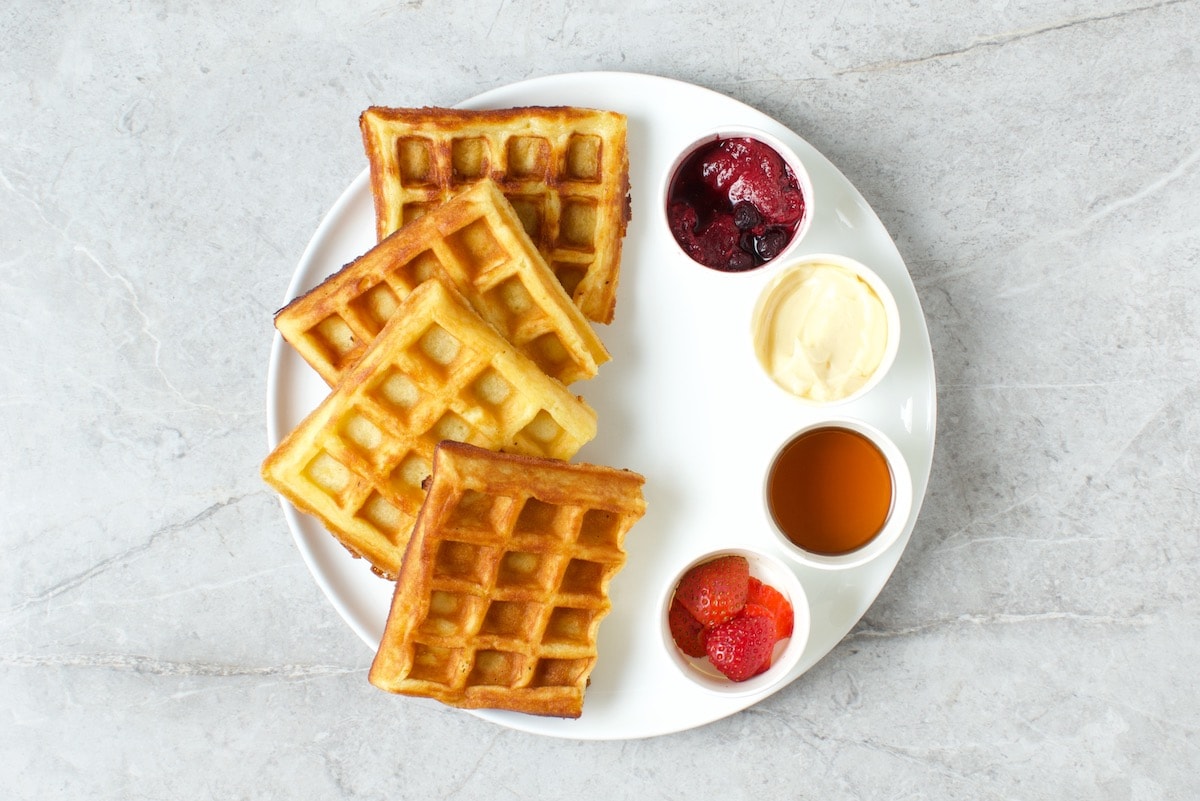 Waffles are the perfect brunch food, but who wants to spend Sunday morning slaving over a waffle iron?

In this article, I share the results of my experiment reheating waffles using 6 (yes 6!) different methods.

The goal? to find the method that gives, the fluffiest, lightly crispy waffles. Just like when they’re fresh out of the waffle iron.

I also share some tips to keep your waffles fresh for as long as possible.

Reheated waffles can end up being too dry and crunchy, or they’re spongy and doughy, with all the appeal of wet cardboard.

I wanted to get that just-baked goodness each and every time.

Here are the methods I tried:

The toaster ended up being my favorite method. The waffles came out with the right amount of crunch and soft, fluffy middles.

The oven and the skillet were close runners-up.

The microwave and the air fryer are great in the right situation, but won’t suit everyone.

Now that you’ve got a taste of the results let’s dive into the details!

Reheating waffles in the oven

Preheat the oven to 350°F (180°C). Lightly grease a baking tray with butter and spread the waffles out next to each other. Cover the waffles with foil and bake for 5-10 minutes (15 minutes if frozen). Take the foil off for the last few minutes to allow the waffles to crisp a bit.

How to reheat waffles in the oven:

If you prefer not to use butter on the baking tray, lining it with parchment paper works too.

I found that putting a little butter on top of my waffles and allowing it to melt and sink in produced a delicious, buttery center.

This is a great method for reheating lots of waffles at once, and you’ll get consistent results.

The only downside is it’s a little slower than some of the other methods, and your waffles won’t get super crisp (but hey – some people prefer softer waffles anyway).

Reheating waffles in a toaster

Reheating waffles in a toaster is easy but watch them carefully to avoid burning them. Place the waffles in the toaster and then heat them on a high-heat setting for between one and two minutes. If the waffles are frozen, use a lower heat setting.

How to reheat waffles in a toaster:

Never put pre-buttered or sauced waffles in a toaster.

The fat will drip down into the bottom of the toaster and could cause a fire.

This was my favorite method because the waffles got a nice crispy on the outside but weren’t dry in the middle.

The only downside to using the toaster to heat your waffles is that you can only do two at a time (unless you have a four-slice toaster).

For larger gatherings, you’ll be better off heating your waffles in the oven as you can get more done at once.

Reheating waffles in the microwave

Spread the waffles out on a microwave-safe plate (avoid stacking) and cover them with a damp paper towel. Heat in 10-second intervals until they are warmed through. Remove them from the microwave and allow the waffles to rest for 30 seconds before serving.

Top tip: the microwave is excellent at reviving stale waffles.

How to reheat waffles in the microwave:

Eat the waffles quickly before they cool down.

You should also be careful not to leave the waffles in the microwave too long. This will dry them out as well.

The microwave is super fast, but the waffles suffer a little.

Instead of being crisp, they’re a bit soggy and chewy (but still taste nice!).

The only time I recommend using the microwave is if your waffles are old and stale. It is very good at softening hard waffles.

Reheating waffles in a skillet

Place a skillet on the stove and heat over medium heat. Melt some butter in the pan (or use cooking spray). When the pan is hot, spread the waffles out and heat for 1-2 minutes. Then, flip them over and heat the other side for a further 60 seconds. Keep heating them until they’re warm and crispy.

How to reheat waffles in a skillet:

I like to use a medium heat so that I know the waffles won’t burn, but if you want them super crispy, use a higher heat.

This could have been my favorite method if it wasn’t for the extra pan I had to wash up after doing it!

The waffles had a great butter flavor, and the edges were crispy, which I liked.

Reheating waffles in an air fryer

Preheat the air fryer to 350°F (180°C). Spread your waffles (buttered or plain) out in the air fryer basket, leaving a little space around each one for the air to flow evenly. Heat the waffles for two to three minutes until they are hot and crispy.

How to reheat waffles in an air fryer:

The air fryer is quick and works well as an alternative to using a full-size oven.

But the air fryer has a habit of burning food if you’re not careful.

As waffles are pretty delicate and burn easily, you have to watch them carefully to avoid ruining yours.

This method was okay, but I found the waffles dried out slightly. I definitely wouldn’t recommend using this method if your waffles are stale.

That said, it’s nothing that lots of syrup couldn’t solve!

Reheating waffles in a waffle iron

This method works really well, but if your waffles are already on the browner side, it could tip them over the edge.

How to store waffles

To store waffles, let them cool to room temperature before refrigerating them in a tightly sealed zip loc bag. Waffles will stale quickly in the fridge, so if you plan on keeping them for longer than one day, I recommend freezing them instead.

Allowing the waffles to cool down before sealing them helps avoid the issue of condensation forming inside their container.

Related: How To Keep Churros Fresh

Can you freeze waffles?

Waffles freeze really well as long as they’re fresh when you freeze them. Frozen waffles last up to three months in the freezer, and they’re very easy to reheat straight from frozen, so you don’t need to worry about thawing them.

How to freeze waffles:

Flash freezing the waffles first means you can easily take one or two out at a time, rather than having to defrost a whole bag’s worth because they’re stuck together.

Alternatively, you can separate the waffles with parchment paper before putting them into the freezer bag.

Removing the air from the freezer bag is an important step because it reduces the risk of freezer burn.

The best way to get rid of the air (besides vacuum sealing) is to suck the air out with a straw or dunk the bag in some water to force the air out.

You can tell if the waffles are getting freezer burn if they start to turn white. If they begin to change color, it’s best to just throw them out and make new ones.

How to reheat frozen waffles

The quickest way to reheat frozen waffles is in the toaster or the microwave. The toaster will give the waffles some crisp, while the microwave will leave them soft. If you have lots of waffles to reheat at once, you can use the oven. Preheat the oven to 350°F (180°C) and cover the waffles with foil while they heat. 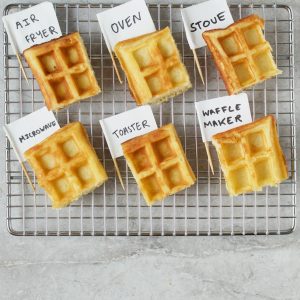 Exactly How To Reheat Waffles

Never put pre-buttered or sauced waffles in a toaster. The fat will drip down into the bottom of the toaster and could cause a fire. The only downside to using the toaster to heat your waffles is that you can only do two at a time (unless you have a four-slice toaster). For larger gatherings, you’ll be better off heating your waffles in the oven as you can get more done at once.