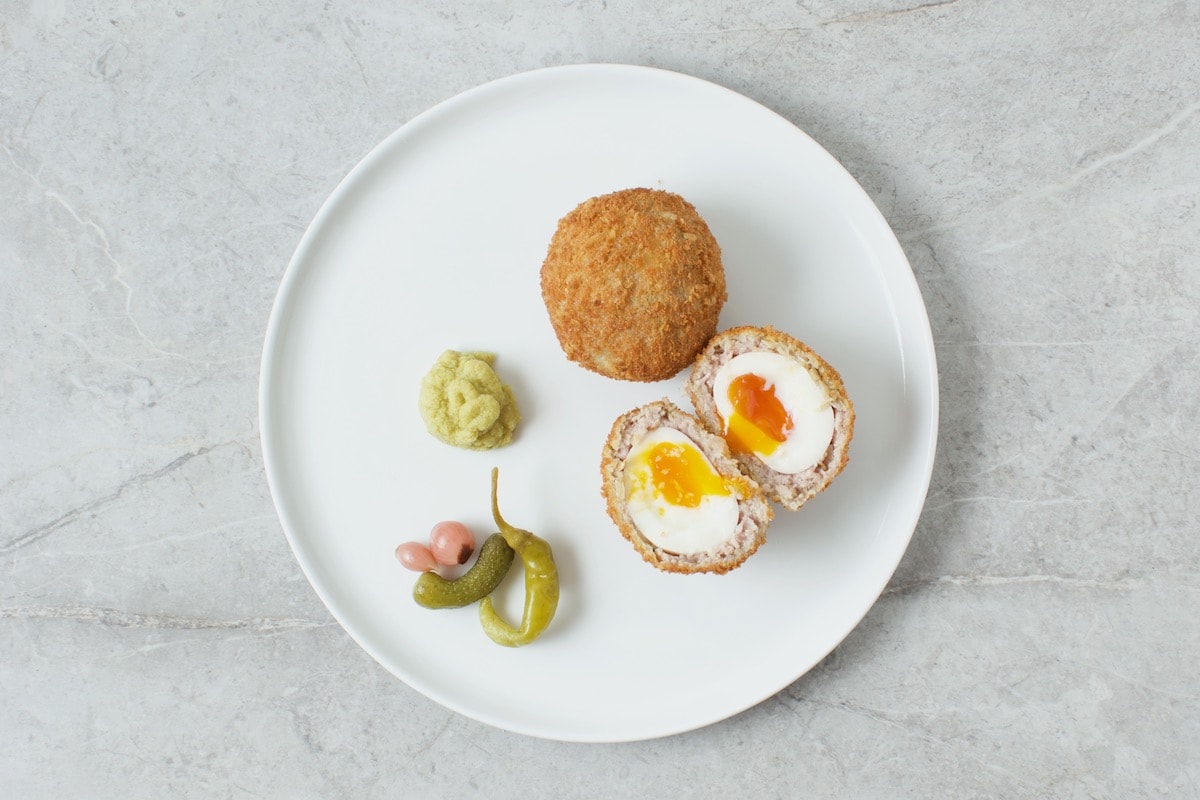 You can eat Scotch eggs cold, but they taste so much better warmed up.

The problem is how to reheat them without overcooking the egg or leaving the breading soggy and unappetizing.

My mission this week was to test four different methods to reheat Scotch eggs.

I’ve also included some tips on how best to store them, so they stay as fresh as possible.

If you’re pressed for time, here’s the short answer.

The best way to reheat a scotch egg is in the oven. Preheat your oven to 350°F(180°C). Take the Scotch eggs and place them on a baking tray or wire rack. Reheat the Scotch eggs for 10 to 15 minutes. If the Scotch eggs are big (and hard-boiled), cut them in half to ensure they heat through.

Scotch eggs might look complicated to make, but they’re actually pretty simple when you’ve got the process down.

So, one Friday night, I prepared a batch of Scotch eggs ready for my experiments the next day.

I tried the following reheating methods:

The air fryer gave the Scotch egg a super crispy outside which I really liked – it was my favorite method.

The oven also worked well. It was just a bit slow (unless you have a toaster oven).

I wasn’t a fan of refrying because the results were greasy, and it was a lot of hassle.

The microwave was super quick but didn’t bring any crunch back to the Scotch eggs.

Reheating Scotch eggs in the oven

Preheat the oven to 350°F(180°C). Take the Scotch eggs and place them on a baking tray or wire rack. Heat the Scotch eggs for 10 – 15 minutes, depending on their size. If the Scotch eggs are big (and hard-boiled), consider cutting them in half to ensure they heat through.

How to reheat Scotch eggs in the oven:

As the size of your eggs will vary, it’ll take a little trial and error to get the timing just right.

To test if the Scotch eggs are hot in the middle, stick a sharp knife into the Scotch egg and feel how hot the metal is when you pull it out.

If the metal is warm, the Scotch eggs are done.

I was pretty happy with the results from the oven.

The outside was crisp (although not as crispy as the Scotch eggs from the air fryer), while the meat remained moist.

The egg warmed through, and it’s possible to keep the yolk runny if that’s what you want.

Because the oven heats from the inside out, the egg doesn’t become overdone.

The only downside is that the oven is a little slow (especially if you’re using a big one). Toaster ovens are quicker.

Reheating Scotch eggs in the microwave

To reheat a Scotch egg in the microwave, slice it in half or into quarters and place it on a paper-towel lined microwave-safe plate. Microwave the Scotch egg for 15 seconds. Test to see if it’s heated through and continue to heat in 10-second intervals until it reaches your desired temperature.

Because you need to slice the eggs for this method, it’s not suitable for really runny Scotch eggs.

How to reheat Scotch eggs in the microwave:

It’s generally not safe to reheat whole boiled eggs in a microwave.

There is a genuine possibility that they could explode in the microwave and create a huge mess (and smell REALLY bad).

If you overcook eggs in the microwave, they can become chewy and rubbery.

That’s why I recommend using such short time intervals – to avoid this happening.

The paper towel on the plate will soak up any excess grease that leaks out of the Scotch egg crumb while it’s heating.

The microwave didn’t give the best results, but you cannot ignore its convenience, so some of you will inevitably end up using this method.

The breading on the outside of the Scotch egg didn’t have any crunch, and the eggs were a tiny bit rubbery.

But the meat was still moist!

To reheat Scotch eggs in an air fryer, set it to 350°F(180°C). Spray the Scotch eggs with a light coating of oil and place them in the basket. Don’t forget to leave a small gap between each one. Heat the Scotch eggs for 4-5 minutes. If not heated fully, then leave them in for a little longer.

How to reheat Scotch eggs in the air fryer:

Just as with the oven, if you have giant Scotch eggs, it’s best to cut them in half before heating them to make sure they heat through.

The oil helps get the outside super crisp, but it’s not always needed.

If you previously fried the Scotch eggs, then it’s likely they already have some residual oil in their breading that will crisp them up.

This was my favorite method because of how crunchy the breading on the outside was.

I warmed a whole scotch egg, and the egg in the middle was only lukewarm (but I didn’t mind this).

If you want it piping hot all the way through, definitely consider cutting it in half.

Heat some oil until it reaches a temperature of 350°F(180°C). Lower the Scotch eggs in the hot oil, and heat them for 30-60 seconds. Roll them over to make sure that the whole thing heats evenly. Remove the eggs from the oil and let them rest on a paper towel or wire rack for 60 seconds before serving.

How to reheat scotch eggs by re-frying:

It’s really important that the oil is at the right temperature – I would use a food thermometer for accuracy.

If the oil is too cold, it will just soak into the breaded layer, making it overly oily.

After the eggs have spent a little time on the paper towel, you can pat them all over with some more paper towel to remove any oil that may not have dripped off.

This reheating method was a lot of effort for a snack, and in my opinion, it’s just not worth it.

Despite my best efforts, the Scotch eggs came out a bit greasy.

On the plus side, the outside was VERY crunchy. You might love this method if you don’t mind an oily after-taste.

How to store scotch eggs

You can store Scotch eggs in the fridge for 3-4 days. Let the Scotch eggs cool to room temperature, and then place them in an airtight container lined with paper towel. The paper towel will absorb any excess moisture, keeping the breading crispy.

Always allow the Scotch eggs to cool before you seal the container.

Otherwise, condensation will build up in the container and leave you with soggy Scotch eggs.

Can you freeze scotch eggs?

I don’t recommend freezing Scotch eggs. Freezing will change the consistency of the eggs, making them rubbery and tough. The sausage casing can fall apart, while the breadcrumbs will become soggy and unappetizing.

But if you do want to freeze them, here’s how.

How to freeze scotch eggs:

The double-layer helps to protect the Scotch eggs against freezer burn.

To thaw the Scotch egg, leave it in the fridge overnight. 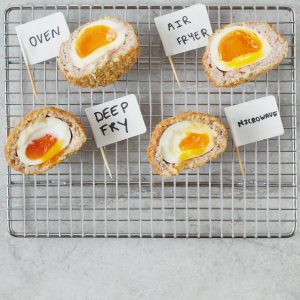 Exactly How To Reheat Scotch Eggs