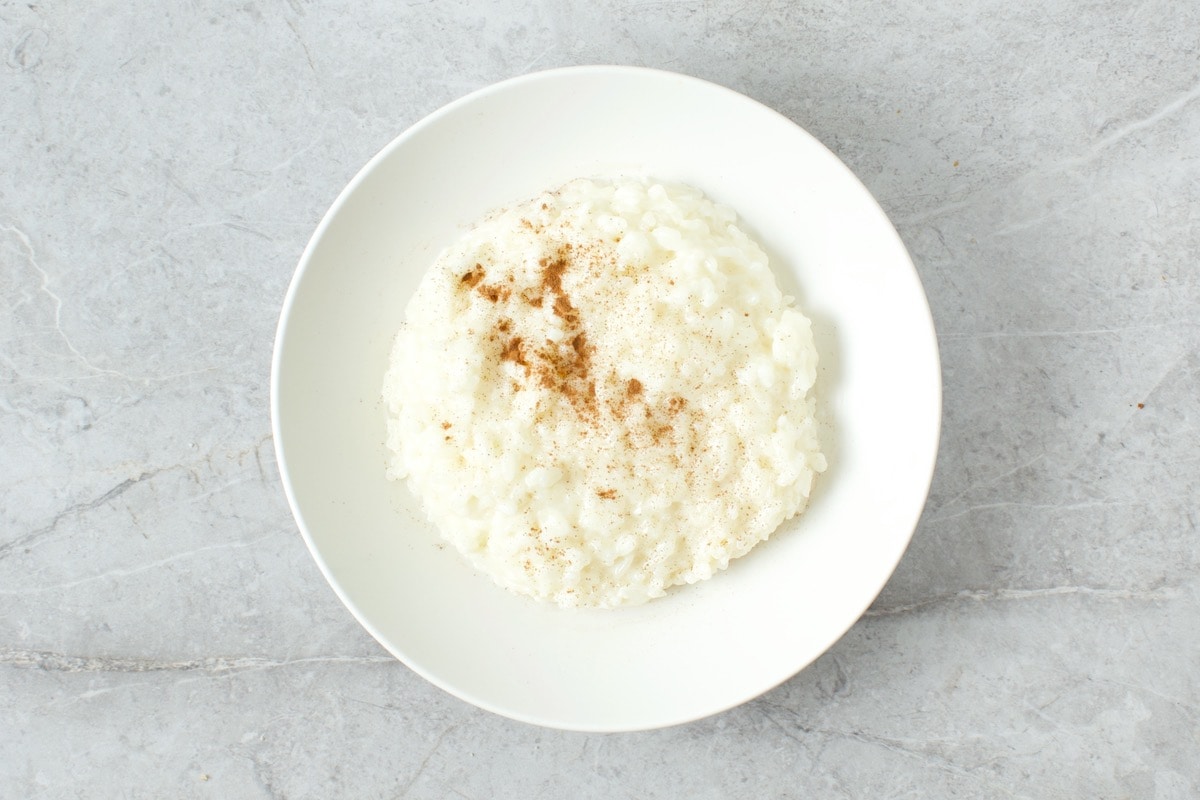 I’m in the hot camp, but rice pudding can be tricky to reheat.

So I decided to do an experiment and test four different ways of reheating it.

I was looking for a method that re-invigorated the creamy texture of my rice pudding rather than leaving it thick and gloopy.

In a rush? Here’s the short answer:

The best way to reheat rice pudding is on the stovetop. Place your leftover rice pudding in a heavy bottom pan. Add 2-3 tablespoons of milk or cream per serving and reheat over a medium heat. Stir frequently until heated through, adding more liquid as necessary.

I made a boatload of rice pudding for my tests and kept it in the fridge overnight.

The next day, I experimented with four different reheating methods:

Overall, the stovetop method was my favorite. You get great control over the final consistency of the rice pudding.

The steamer works really well for pudding that’s a little drier, but it’s not as convenient as the stovetop.

The microwave worked fine for smaller portions and was super quick.

I wasn’t a fan of using the oven because it was harder to see what was going on.

Reheating rice pudding on the stove

Place leftover rice pudding in a heavy-bottomed pan and heat on medium heat. Add 2-3 tablespoons of milk or cream per serving, stirring frequently and adding more liquid as needed. If heating in a regular pan, use heat on medium-low or low.

How to reheat rice pudding on the stove

If you don’t have any milk or cream in your fridge, you can use water instead to loosen the sauce, but the final result might lack some creaminess.

You can also add other things into the rice pudding while it’s heating, such as a bit of cinnamon or nutmeg.

The spices will bring the flavors of the rice pudding back to life.

Reheating rice pudding on the stovetop was my favorite method.

You can keep a close eye on the pudding as it reheats, so you can see immediately if it needs more liquid or if it’s getting too hot.

You can also heat large or small portions. It doesn’t matter.

Just make sure you have a suitably sized pan.

Reheating rice pudding in the microwave

Place a portion of your leftover rice pudding in a microwave-safe bowl. Add a splash of milk or cream and cover the bowl with a damp paper towel. Heat in 30-second intervals, stirring after each pause, until the mixture is heated through.

How to reheat rice pudding in the microwave

The damp paper towel over the top of your bowl will help the pudding retain moisture while it’s heating.

Plastic wrap will do fine if you don’t have a paper towel on hand.

If you notice the pudding seems a little dry while you’re stirring it, feel free to add in some more liquid until it reaches your desired consistency.

Reheating your rice pudding with a microwave works fine as long as you go slowly and use short heating bursts.

It’s the quickest method and so perfect for just one portion.

For larger portions, the stove is better because there’s less chance of overheating the pudding.

Reheating rice pudding in a steamer

To reheat rice pudding with a steamer, get your steamer ready and place the rice pudding in a bowl. Add a splash of milk or cream to your bowl and place it directly into the steamer and cover it with a lid. Steam for 3 to 4 minutes, stirring halfway through.

How to reheat rice pudding in the steamer

Stirring is especially important with this method.

If you forget, the outside will overcook while the inside will not be hot enough.

The steam will be very hot, so the rice pudding should heat quickly.

Reheating rice pudding with a steamer is a great way to get really moist and creamy leftovers.

There’s no chance of being left with a dry bowl of rice.

But it can be a bit of a hassle to set up and will only work if you can fit a bowl inside your steamer!

Reheating rice pudding in the oven

Lightly grease a baking dish and evenly spread the rice pudding over the bottom (but not too thinly). Sprinkle a few tablespoons of milk or cream over the top. Cover tightly with foil. Heat your rice pudding at 350°F (180°C) for 5 to 10 minutes, stirring halfway through.

How to reheat rice pudding in the oven:

When greasing your baking dish, keep it very light.

You don’t want the oil to make your pudding greasy and alter the taste.

As always, make sure the dish is appropriately sized to the portion you’re heating. Spread the pudding to heat evenly, but not too thinly, as it could burn.

Don’t be scared of adding too much moisture.

The oven can be very drying, so it’s important to keep the rice pudding a little wet.

The oven isn’t the best option for reheating your rice pudding.

Not only is it slow, but it’s also hard to keep an eye on the rice and adjust when it needs more moisture, when it’s sticking, or when it’s burning.

How to store rice pudding

To store rice pudding, put any leftovers into an airtight container as soon as possible. Then place the rice pudding in the fridge, where it will last for up to 3 days. The rice will absorb lots of liquid from the sauce during storage, so you’ll need to add extra moisture when you’re reheating it.

Rice pudding doesn’t need to be at room temperature before storing it, but you should cool massive portions quickly, so the middle doesn’t overcook.

If you have a lot of pudding to store and need to cool it quickly, put the container in a cold water bath.

You can also spread the rice out over a baking tray or divide it into smaller containers to allow the heat to disperse more quickly.

Can you freeze rice pudding?

You can freeze rice pudding, but you may have to work with it a little bit to bring it back to the proper consistency when you’re reheating by stirring often, adding moisture back in, and being careful not to overheat.

How to freeze rice pudding

The rice pudding must be cool before you freeze it, but you don’t want to leave it hanging around on the counter for too long.

I opt to chill it in the fridge for a while before freezing, but you can also submerge the rice pudding in an ice water bath.

Or spread it out thinly on a baking tray so all the heat can escape.

I prefer using freezer bags over airtight containers because it’s easy to remove excess air, and you can stack the bags in the freezer, so they’re very space-efficient.

How to thaw and reheat frozen rice pudding

To safely thaw frozen rice pudding, leave it in the refrigerator overnight. If you can’t wait that long, you can put it in a heavy-bottomed saucepan with some extra milk and heat it on very low heat, stirring frequently. You can also microwave in short intervals, stirring often. 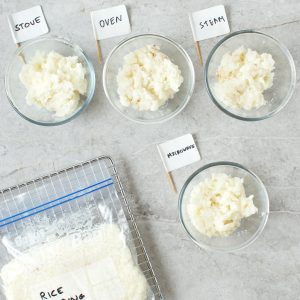 Exactly How To Reheat Rice Pudding

If you don’t have any milk or cream in your fridge, you can use water instead to loosen the sauce, but the final result might lack some creaminess. You can also add other things into the rice pudding while it’s heating, such as a bit of cinnamon or nutmeg. The spices will bring the flavors of the rice pudding back to life.