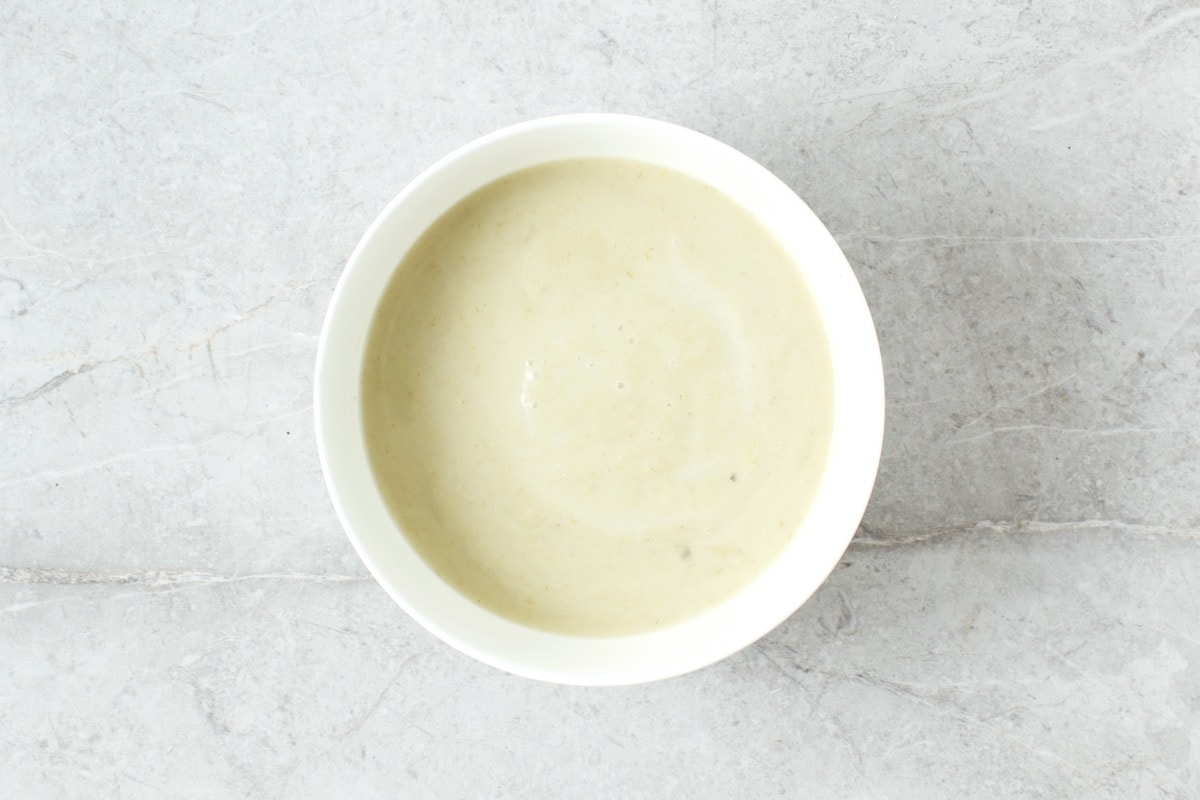 Freshly made potato soup is a creamy, smooth delight.

But have you ever reheated it for it to turn into a grainy mess?

I’m here to help you avoid that.

I also include some tips on how best to store and freeze your potato soup to keep it as fresh as possible.

The best way to reheat potato soup is on the stove. Pour the potato soup into a cold pan and reheat over medium-low heat. If your soup is a little thick, add some stock or milk to thin it out. Stir the soup frequently while it’s heating up. Don’t allow the soup to boil as this can cause it to split.

I made a big batch of potato soup for lunch one Sunday morning and then put the leftovers in the fridge.

(PS Do Not Use The Crockpot, more on this later)

I was looking for a creamy soup that kept its smooth mouth-feel.

The stove was my favorite method because it was easy to control the temperature and texture of the soup.

The double boiler was a bit slow, and the microwave worked OK, but the results are less consistent, and there’s a higher risk of the soup separating.

The key to perfectly reheated potato soup is to go low and slow. Heat the soup too quickly, and it will split.

Reheating potato soup on the stove

To reheat potato soup on the stove, pour your soup into a cold pan and warm it over medium-low heat. If your soup is a little thick, add some stock or milk to thin it out. Stir the soup frequently while it’s heating. Don’t allow the soup to boil because this will split the soup.

How to reheat potato soup on the stove:

I like to use a heavy-bottom pan when I’m reheating a delicate soup like potato soup because there’s less chance of it overheating.

If you’ve only got a thin pan, I recommend using a low heat.

This was my favorite method because it was so easy to see how the soup was doing.

I could test the temperature constantly, tweak the consistency really easily and even add extra seasonings if I wanted.

The final soup tasted just like the fresh version, and it works for big and small portions.

Reheating potato soup in the microwave

To reheat your potato soup in the microwave, put your soup in a microwavable bowl and set your microwave to 50% power. Warm your soup in 30-second intervals, stirring after each interval. Cover the soup with a paper towel to prevent splatters.

How to reheat potato soup in the microwave:

Microwaves don’t heat evenly, so stirring frequently helps to disperse the heat and avoid any ‘hot pockets’ from forming.

The microwave is undeniably quick and easy, it’s perfect for a speedy lunch, and the soup will be fine as long as you go slowly.

But with more speed comes more risk, so you can’t be 100% sure your soup won’t break and lose its smooth consistency (mine was fine!).

To reheat your potato soup in a double boiler, bring some water to a gentle boil in a pan. Pour the soup into a bowl and place the bowl on top of the pan (making sure there’s a gap between the bottom of the bowl and the water). Stir the soup and let the steam heat it.

Add some extra stock, milk, or water to help thin the soup if needed.

How to reheat potato soup in a double boiler

The gap is important for even heating otherwise, the bottom of the bowl will get extremely hot, and the soup may overheat.

A double boiler is one of the gentlest heating methods you can get.

You’re using secondary heat rather than direct heat, so there’s no real risk of the soup splitting.

This method works best with small to medium-sized portions of soup.

I don’t have a double boiler, so I used a makeshift one.

It worked well, and my soup heated nicely without splitting. The issue was that it was pretty slow, and I didn’t see any benefit to using a double boiler over a low heat on the stove.

Both methods were gentle enough to preserve the texture of the soup.

A double boiler would be a good option if you have a small soup portion and only big pans (where the soup would be spread too thin). Or if your soup is really fragile.

Reheating potato soup in a crockpot

It’s not advisable to reheat potato soup in a crockpot. The crockpot heats food slowly, so there’s a risk the leftovers will be in the bacterial danger zone for too long and will become unsafe to eat.

What you can do is heat the soup up on the stove or in the microwave, and then once it’s up to temperature, keep it warm in the crockpot.

How to Store Potato Soup

To store potato soup, leave it to cool before transferring it into an airtight container and keep it in the fridge. Potato soup will last for 3-4 days in the fridge.

The soup doesn’t need to be room temperature before putting it in the fridge, but you don’t want it to be boiling hot either.

If you have a big pot of soup you need to cool quickly, place the pot in a sink full of cold water.

You can also simply separate the soup into smaller containers so the heat can dissipate quicker.

The soup will thicken in storage as the potatoes in the soup absorb some of the liquid. When you’re reheating it you can add some extra water, milk, or stock to thin it out again.

Can You Freeze Potato Soup?

Potato soup doesn’t always freeze well. The texture can become grainy, and the dairy can separate, ruining the soup’s creamy consistency. If you want to freeze the soup, leave any dairy out and instead add it in when you’re reheating it.

Potato soup will last for up to a month in the fridge. It will remain safe to eat beyond this, but the quality may decline.

How to freeze potato soup:

You can also use airtight containers, but I prefer freezer bags because you can stack them up in the freezer, and they’re very space-efficient.

If you use an airtight container, place a piece of plastic wrap over the surface of the soup to protect it from freezer burn.

How to thaw and reheat frozen potato soup

Slowly thaw the potato soup in the fridge for the best results. But if you’re pushed for time, you can reheat it in the microwave or on the stove. Use a very low heat on the stove or defrost mode on the microwave until the soup is melted. Then you can turn the heat up. 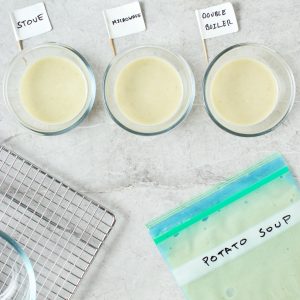 Exactly How To Reheat Potato Soup

I like to use a heavy-bottom pan when I’m reheating a delicate soup like potato soup because there’s less chance of it overheating. If you’ve only got a thin pan, I recommend using a low heat.