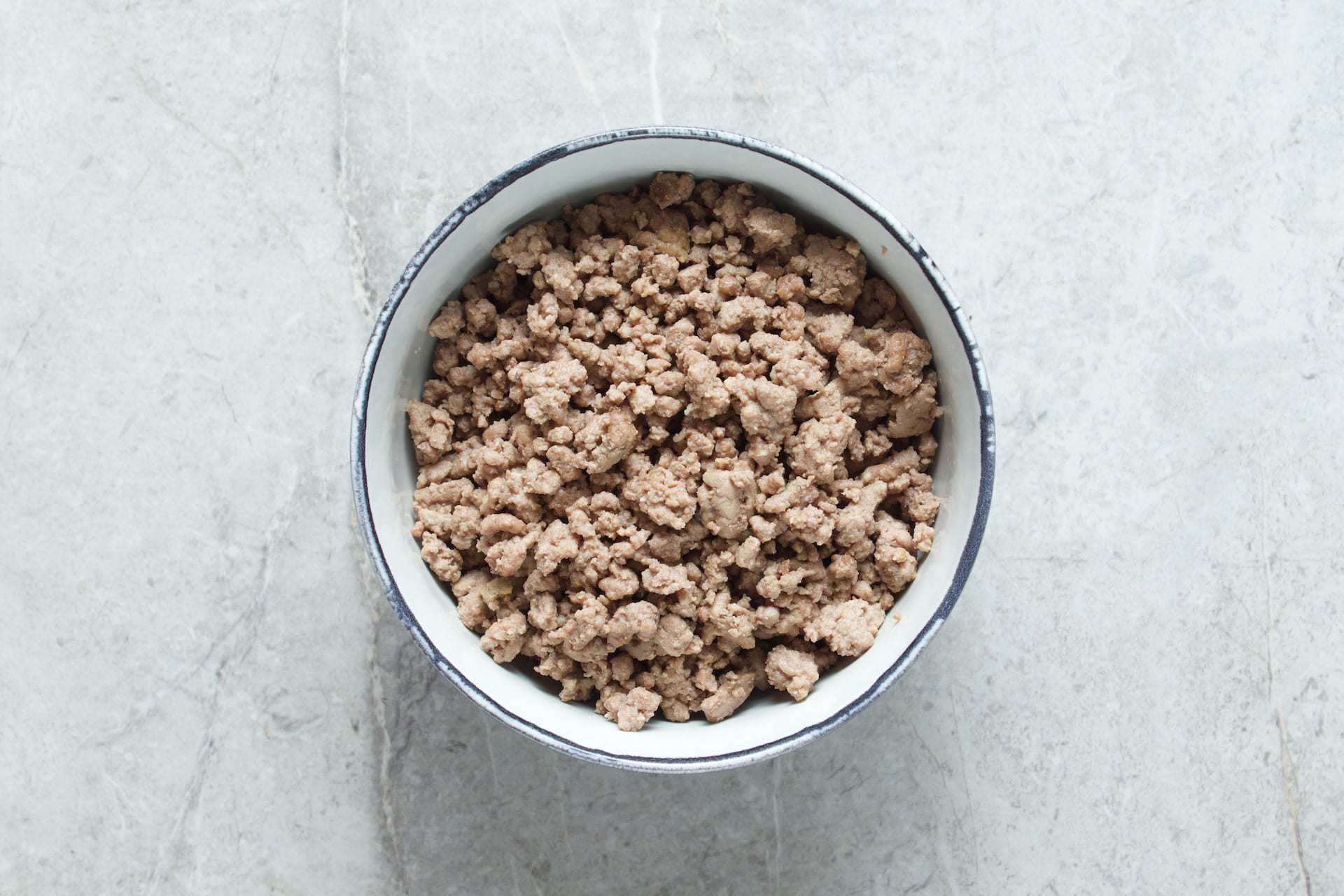 Mince is a highly versatile ingredient.

I always keep a few ready-to-go portions on hand for days when I’m too busy to cook.

We can all do with a few shortcuts now and then, can’t we?

But reheating mince can be tricky as there are food safety issues you need to keep in mind.

Maintaining the taste and texture can also be problematic depending on which method you decide to use.

So, let’s crack on and find out how best to warm up your mince.

I used beef mince this time, but these methods also apply to chicken, turkey, pork, and lamb mince.

For today’s article, I tested out 3 methods to reheat my beef mince.

If you’re pushed for time, then use the microwave. I got great results; just be careful you don’t overcook your meat.

For the best overall result, I found that reheating mince by frying on the stove brought out the flavors and left me with moist, succulent meat.

The oven was okay, but the meat was a little dry.

All the methods require you to add some liquid to keep the meat moist.

Dryer meats such as chicken and turkey need more liquid to keep them juicy compared to fattier cuts like full-fat mince or pork.

Reheating mince in the microwave

To reheat mince in the microwave, place it in a microwave-safe bowl, along with a tablespoon of water, stock, or olive oil. Cover the bowl with a lid or plastic wrap. Ensure that your lid has a small gap or hole for steam to escape. Check the mince every 30 seconds to prevent overcooking.

How to reheat mince in the microwave:

If your mince is frozen, remove it from its packaging and defrost it using the “defrost” setting first. You can then cook it immediately afterward, following the steps above.

Microwaved mince can come out slightly bland if you don’t season it, so I suggest adding some extra salt and pepper or some spices to enhance the flavor.

To save time, you can microwave other components of your dish at the same time as your mince.

Be careful with your timings to avoid overcooking the more delicate ingredients.

For me, the microwave offers a good balance between convenience and taste.

It’s super quick, and the mince has a nice texture.

One downside is that the flavors come out kind of muted. Also, it can be easy to overcook the meat if you don’t check on it often.

Reheating mince on the stove

Cover the bottom of a skillet with water, stock, or sauce and heat it on medium heat. Add the mince and stir continuously for 3-4 minutes. Add more liquid if it starts to dry out. If you want crisper mince with some crunchy bits, use oil and increase the heat to medium-high.

How to reheat mince on the stove:

If you plan to add extra veggies to your mince, you can cook these in the pan before adding the mince.

The liquid in the frying pan ensures you’re steaming the meat rather than frying it, so it doesn’t dry out.

Related: How To Get Ground Beef Really Fine

If you want some browning and don’t mind the meat being a little dryer, then aim to fry it in some oil instead of steaming it.

This was my favorite method because it brought out the flavors of the mince more than any other method.

The mince was easy to keep juicy by just adding more water, and it was quick to heat up.

Reheating mince in the oven

To reheat mince in the oven, preheat your oven to 350°F (180°C). Add 2-3 tablespoons of water, stock (or a sauce) to an ovenproof dish, and add the mince. Cover the dish with aluminum foil and place it on a middle rack. Cook for 10-12 minutes, stirring halfway through.

How to reheat mince in the oven:

I initially add 2-3 tablespoons of liquid to the mince, but I will check at the halfway mark and add more liquid if it seems to be getting dry.

The foil is essential because it helps trap moisture in an otherwise dry environment.

I was pretty disappointed with this attempt and had to give the oven a thumbs down.

Despite my best efforts, the meat was a little too dry for my taste, and it would have been even worse if I was reheating chicken or turkey instead of mince.

The only time I would recommend the oven is if you have a large quantity of mince to reheat and it won’t fit comfortably in a skillet or the microwave.

Can you reheat mince more than once?

The Food Standards Agency recommends that you should only reheat mince once. But, if you do it correctly, you can safely reheat mince several times (although the quality will deteriorate after each reheating cycle). You need to heat the mince to 165°F (74°C) every time for it to be considered safe.

You also need to make sure you cool the mince down as quickly as possible after you reheat it, so it doesn’t spend more than two cumulative hours in the ‘danger zone’, which is between 40°F (4°C) and 140°F (60°C).

As an example, you could cook the mince by itself and then store it in the fridge.

The next day you could use the mince in a chili (1st reheat).

Following all the precautions, you can then safely reheat any chili leftovers. This would be the second time you’re reheating the mince.

Always follow these guidelines when storing and reheating mince:

How to store mince

To store mince in the refrigerator, drain any excess fat and wait for the mince to cool to near room temperature. Once cool, place it in an airtight container in the fridge, where it will keep for 3-4 days. Use a container where there’ll be minimal room leftover as excess air can dry the meat out.

If there’s a big gap at the top of your container, you can cover the mince with some plastic wrap.

How to freeze mince

To freeze leftover mince, drain any excess fat and wait for the mince to cool. Once cooled, portion the mince out and put it in a heavy-duty freezer bag, squeezing any extra air out. The mince will be good for 4 months in the freezer before the quality starts to deteriorate.

For extra protection against freezer burn, you can wrap the bag in a layer of aluminum foil or plastic wrap.

I always freeze the mince in thin, portion-sized blocks.

This prevents you from having to defrost all the mince only to have some leftover again.

Plus, the thinner the block of mince is, the quicker it will thaw.

You can even freeze portions of mince in the same freezer bag.

Use your finger to draw a line between the portions, and keep the freezer bag flat while the mince hardens.

How to thaw ground mince

The safest way to thaw mince is in the refrigerator overnight. If you need the mince quickly, you can either thaw it in the microwave or under cold running water. The microwave will only take a few minutes, but you have to be careful not to overheat the mince. 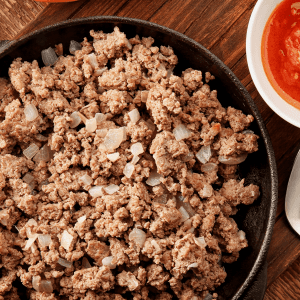 The BEST Way To Reheat Mince

Mince is a highly versatile ingredient.I always keep a few ready-to-go portions on hand for days when I’m too busy to cook.But reheating mince can be tricky as there are food safety issues you need to keep in mind.Let’s crack on and find out how best to warm up your mince.
No ratings yet
Print Pin Rate
Course: Main Course
Cuisine: All
Keyword: how to reheat mince, mince
Prep Time: 1 minute
Cook Time: 4 minutes
Total Time: 5 minutes
Servings: 1 person
Calories: 332kcal

If you plan to add extra veggies to your mince, you can cook these in the pan before adding the mince. The liquid in the frying pan ensures you’re steaming the meat rather than frying it, so it doesn’t dry out. If you want some browning and don’t mind the meat being a little dryer, then aim to fry it in some oil instead of steaming it.