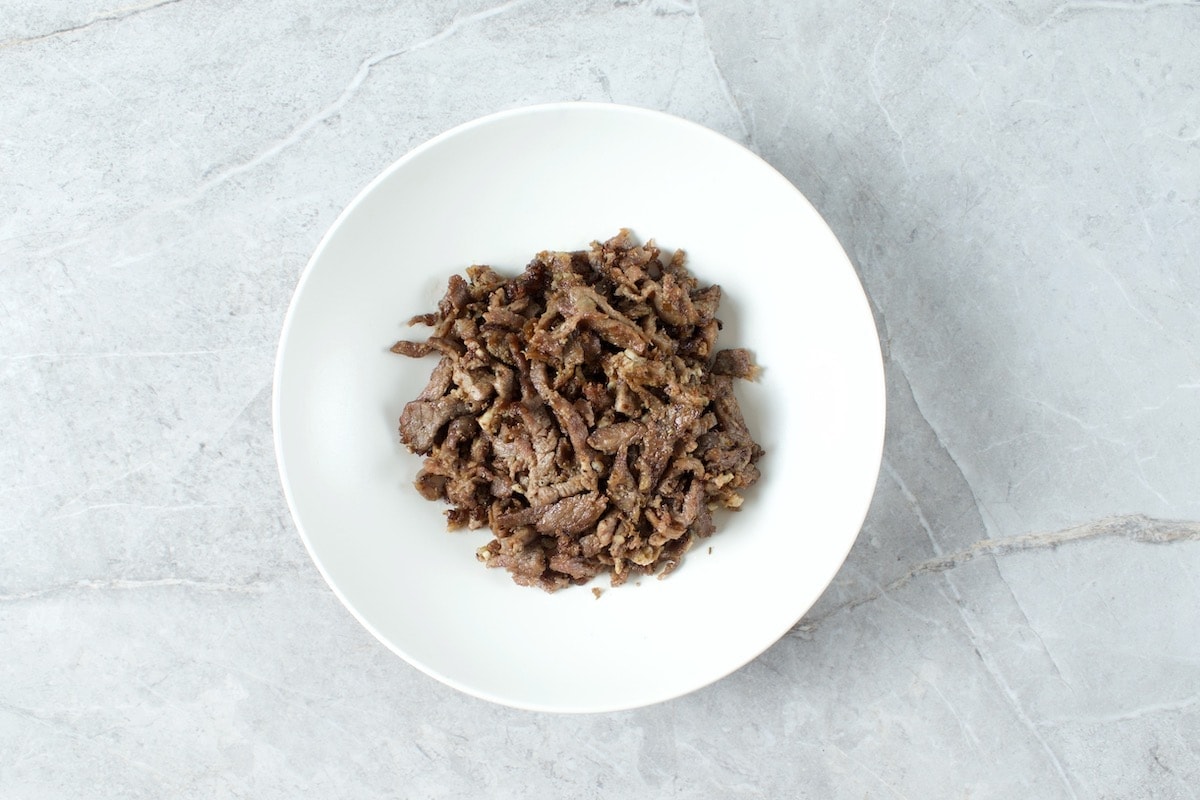 Have the generous kebab meat portions defeated you again?

But what’s the best way to reheat leftover kebab?

To find out, I’ve tried and tested the most common ways to reheat kebab meat to see which one works best.

If you’re ready, then let’s dive in.

SAFETY NOTE: Never attempt to reheat a whole kebab cone. The meat will spend too much time in the ‘danger zone’ for bacteria and could become unsafe to eat. Shredded or sliced kebab is fine to reheat.

I decided on a mid-week cheat meal and ordered enough kebab for the family and my experiment.

The best thing to do with any leftover kebab meat is to keep and reheat it separately from any pitas, wraps, or salads.

So that’s what I did. I tested:

Surprisingly, all these methods worked pretty well, and there was no clear winner.

Which one you pick depends on the outcome you want.

For example, if you want crispy meat go for the skillet or the air fryer.

If you want moist meat, go for the steamer or the microwave.

Reheating kebab meat in the microwave

Separate the salad, meat, and bread. Pat the meat with a paper towel to remove any excess fat. Place the meat on a microwave-safe dish and cover with a damp paper towel. Put the meat in the microwave and heat it at full power for 15-second intervals. The meat should be ready in 30 seconds.

How to reheat kebab meat in the microwave:

As the meat is cut into fairly small pieces, it can dry out very quickly if you’re not careful.

The damp paper towel creates steam that keeps the meat moist while it heats up.

Despite my initial skepticism about using the microwave, I was pleasantly surprised.

The meat retained its juicy texture without becoming chewy and stringy. Removing the excess fat before reheating also ensured that I wasn’t left with a greasy taste in my mouth.

Reheating kebab meat in a skillet

A great way to reheat kebab meat is by using a skillet. Put 1 tablespoon of oil in a pan (less if you have oily meat). Warm up the pan on medium heat and put your meat in for 20-30 seconds. Stir the meat and leave for another 20-30 seconds. If the meat seems dry, put a lid on the pan to create steam.

How to reheat kebab meat in a skillet:

While it can be tempting to try and hurry the process up by using a higher heat, don’t.

The kebab meat will burn very quickly if the pan gets too hot.

Try not to overcrowd the pan to ensure even heating.

I was pleased with the result and found that the skillet made the outside of the kebab meat a little crispier.

If you are reheating fattier meat like lamb, be careful not to go overboard on the oil.

Otherwise, you’ll end up with a slightly greasy coating which can detract from the final result.

I liked the fact that I could reheat the meat quickly, but cleaning the pan wasn’t my favorite task.

Reheating kebab meat in the oven

To reheat your kebab meat, preheat your oven to 400°F (200°C). Spread the meat out on a baking tray covered with 2 tablespoons of water or stock. Cover the baking tray with foil to prevent the meat from drying out and heat for 5-10 mins. Test that your meat has reached 165°F and then serve warm.

How to reheat kebab meat in the oven:

Spreading the meat out evenly on the baking tray helps ensure even heating.

It’s best to keep the kebab meat in a single layer.

If you have multiple layers, consider using more than one baking tray.

With multi-layer meat, the bottom layer might overcook before the top layer has warmed up.

The oven can be a bit slow, so not ideal if you’re in a rush.

However, the meat comes out juicy and delicious. It is also a great method if you have a large quantity to warm up in one go.

Reheating kebab meat by steaming it

To reheat kebab meat by steaming it, set up your steamer on the stove and bring the water to a simmer. Spread the meat out in the steamer and steam for 2-4 minutes. Check that the temperature of the meat reaches at least 165°F (74°C). Remove the meat from the steamer and serve hot.

How to reheat kebab meat by steaming it:

If you don’t have a steamer, then you can set up a makeshift one using a colander or sieve placed over a pot of simmering water.

You just need to find a tight-fitting lid that will allow you to keep the steam in.

I found that the steam heats the meat quite quickly, so this method took less time than I was expecting.

I wasn’t expecting a great result but was pleasantly surprised.

The meat was less greasy than some of the other methods, possibly due to some of the fat dripping off.

And my kebab meat was moist, tender, and retained the flavor of the seasonings well (although it wasn’t crispy).

To reheat the kebab meat in the air fryer, set the temperature to 400°F (200°C). Place the meat into the air fryer and heat it for approximately 2-3 minutes. When the meat reaches 165°F, remove and serve. Optionally, line the air fryer basket with parchment paper so the meat is easy to get out.

How to reheat kebab meat in an air fryer:

The air fryer can be harsh on thinly sliced meat and will heat it very quickly.

Watch your meat like a hawk, so it doesn’t burn.

Once again, I was really happy with the results of my experiment.

The meat was very crispy using the higher temperature, so if that’s what you want, then it’s the best way to achieve that.

The only downside was that the air fryer left the meat with a slightly drier texture.

How to store kebab meat

Store kebab meat within 2 hours of it cooling down to room temperature. For the best results, store your meat in an airtight container in your fridge. Use any leftover kebab meat within 3 days of cooking it. Store the meat separately from the salad and sauce.

I like to pat the kebab meat dry before storing it to remove excess fat.

Otherwise, the fat congeals on the meat, which can look very unappetizing.

Can you freeze kebab meat?

Kebab meat freezes well, making it a great choice for bulk cooking or prepping ahead of time. Since it’s thinly sliced, it will thaw and reheat quickly. Kebab meat will retain its best quality in the freezer for 2 to 3 months.

How to freeze kebab meat:

If you want to flash freeze a large quantity of kebab meat, separate layers with sheets of parchment paper.

Removing all the air from your freezer bag will help protect the meat against freezer burn.

The best way to get all the air out is to dunk the open freezer bag in a bowl of water. The water pressure will force the air out, and you can seal the bag shut.

(psssst, if you have a vacuum sealer use that!)

To thaw the meat, remove it from the freezer and leave it in in the fridge overnight.

You can also thaw it in the microwave, or by placing the sealed bag under running water.

What to do with leftover kebab meat?

Is it safe to reheat kebab meat?

Yes, it is perfectly safe to reheat kebab meat so long as it has not been reheated before.

If your kebab meat or gyro came from a reputable Greek restaurant, then they will only serve you freshly cooked meat that has followed all the food safety rules.

As with all cooked meats, you do not want to leave your kebab meat out for longer than 2 hours, as that is the limit before it is time to eat it or pop it in the fridge or freezer. 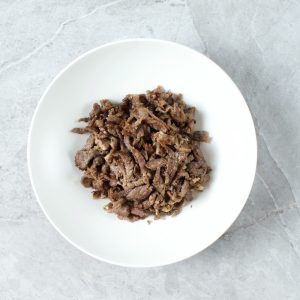 Exactly How To Reheat Kebab Meat

As the meat is cut into fairly small pieces, it can dry out very quickly if you’re not careful.  The damp paper towel creates steam that keeps the meat moist while it heats up.