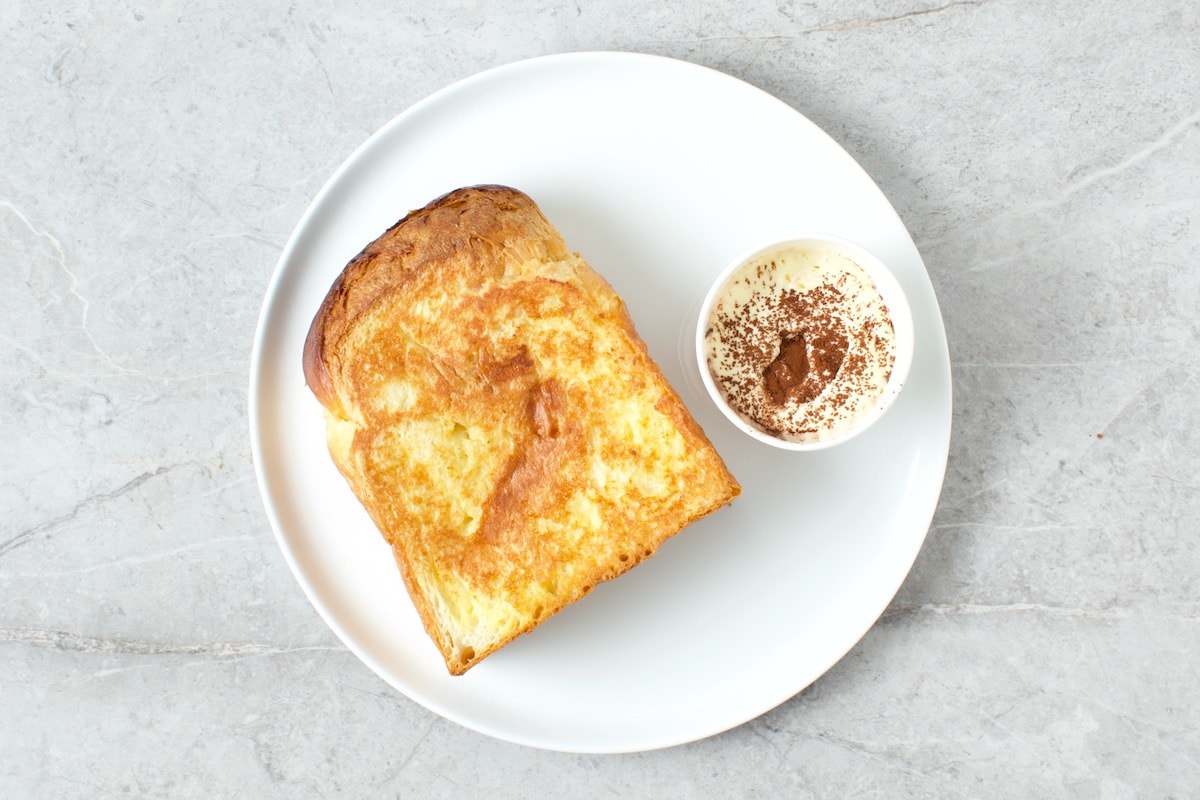 When I have people around for breakfast, French toast is my go-to.

But I inevitably end up making too much, and I’m left wondering if I can recreate the dish for a solo breakfast the next day.

To answer my (and your) question, I decided to experiment with different ways of reheating French toast.

I also have some tips for storing and freezing your leftover french toast.

One morning, I cooked a big batch of french toast and then kept them in the refrigerator overnight.

The next day, I tested five different ways of reheating the dish:

I was looking for crispy-on-the-outside, moist in the middle bread.

The stove and the air fryer were my favorite methods, with the oven being a close runner-up.

The microwave was my least favorite option, but it can be very convenient.

Reheating french toast on the stove

How to reheat french toast on the stove:

If you’re using a non-stick pan, there’s no need to add any oil or butter (but I still like to add some butter for flavor).

If your french toast is really stale, a good trick is to sprinkle some water around the outside of the skillet and cover it with a lid for 30 seconds.

This will ‘steam’ the bread and get some moisture back into it.

This was my favorite method.

It’s often said the best way to reheat something is to heat it the same way you cooked it – and this holds true for French toast.

My French toast had a crisp outer edge and a moist, melt-in-your-mouth inside.

Reheating french toast in the oven

To reheat your leftover french toast in the oven, preheat your oven to 350°F (180°C) and spread your pieces of toast onto a wire rack with a baking tray underneath. Cover the French toast with foil and heat for 5-10 minutes. Remove the foil for two minutes at the end to crisp the bread.

How to reheat french toast in the oven:

If you’re in a rush, you can just use the broiler setting but keep a close eye on the French toast so it doesn’t burn.

The foil stops the bread from drying out too much in the oven, but skip the foil if you have really soggy French toast.

The oven is great for big breakfasts or a brunch where you have a few guests to feed, but it’s a bit slow for one portion (unless you have a toaster oven).

The French toast itself tasted good and had a crispy outside.

Reheating french toast in the microwave

To reheat french toast in the microwave, place a serving of toast on a microwave-safe plate with a damp paper towel draped over the top. Microwave in 15-second intervals until heated through.

How to reheat french toast in the microwave:

The damp paper towel helps prevent the French toast from drying out.

And the short time intervals ensure you don’t overcook the egg and leave it rubbery.

Eat your French toast as soon as possible after heating it because it will stale quickly once it starts to cool down.

And stale french toast is just not it.

Reheating in the microwave is not an ideal method unless you’re in a hurry.

My French toast was quite soggy compared to the other reheating methods.

It was still perfectly edible but just screamed of lackluster leftovers.

To reheat french toast in the air fryer, set it to 350°F (180°C) and spread your slices out in a single layer in the fryer basket. Heat the french toast for 3 to 4 minutes. Serve immediately.

How to reheat french toast in the air fryer:

You may be tempted to stack your toast for a bigger haul at the end, but good airflow is essential for crisping the French toast.

Stick to a single layer and ensure there’s a small space between each slice of toast.

If you want a super crispy outside, spray the french toast with oil or brush it with melted butter before you put it in the air fryer.

I loved the results from the air fryer. If you have one in your kitchen, use it!

It was super quick, required little effort, and the results were delicious.

The toast had a really nice crunch to the outside.

Note: if your french toast is stale, I’d avoid the air fryer since it can be quite drying.

Reheating french toast in the toaster

To reheat french toast in the toaster, place the bread into a toastie pocket, or make a pocket out of parchment paper. Then, pop the French toast into the toaster and heat on a high setting for 1 to 2 minutes. Keep an eye on your timer and a nose out for signs of burning.

How to reheat french toast in the toaster:

The parchment paper or toaster pocket will protect your toaster from drips and crumbs.

Those little burnt bits can definitely affect the taste of your food over time and, in the worst-case scenario, could cause a fire.

I pop my French toast pretty often to check it’s not burning.

This is important if you’re using a new toaster because they can be unpredictable in terms of strength.

The toaster works better than the microwave, and it’s great if you’re looking for a quick breakfast.

The edges weren’t as crispy as some of the other methods because of the parchment paper, but it was still yummy.

How to store french toast

To store leftover french toast, let it cool to room temperature before wrapping the slices in plastic wrap. Separate slices with parchment paper to stop them from getting too soggy. You can also use an airtight container. Store the French toast in the fridge for up to 3 days.

Wrapping the french toast in plastic wrap will keep it moist.

Always make sure the French toast is cool before you seal it because otherwise, condensation will build up in its packaging and turn it mushy.

Can you freeze french toast?

Yes, you can freeze french toast, and it will taste pretty similar to fresh once you reheat it. Make sure to wrap the French toast tightly before putting it in the freezer to prevent excessive moisture loss. To keep the slices separate, flash freeze them or use parchment paper.

How to freeze french toast:

Putting parchment paper in between the slices will prevent them from sticking together, so you can pull out single pieces at a time.

Your other option is to flash freeze individual slices on a baking tray for 1-2 hours before placing them all in a freezer bag.

If you use a freezer bag instead of plastic wrap and foil, make sure to remove all of the air before putting it in the freezer.

This will prevent premature freezer burn.

How to thaw and reheat frozen french toast

There’s no need to thaw french toast before you reheat it, it will reheat quickly from frozen whichever way you choose to heat it. Preheat your oven to 350°F (180°C) and then heat the french toast for 10-15 minutes until soft and warm. Use the broil function at the end to crisp the bread.

You can also use the microwave or even just a toaster.

What to do with leftover french toast

Getting tired of the same taste with all of your leftovers? I get it.

Thankfully, French toast is super versatile. It’s fun and easy to mix it up with some extra toppings!

Using ingredients you already have in the cabinet and refrigerator, you can make your dish seem new and different.

To help you out, I made a list of a few ways you can spice up your traditional french toast:

Exactly How To Reheat French Toast

If you’re using a non-stick pan, there’s no need to add any oil or butter (but I still like to add some butter for flavor). If your French toast is really stale, a good trick is to sprinkle some water around the outside of the skillet and cover it with a lid for 30 seconds. This will ‘steam’ the bread and get some moisture back into it.