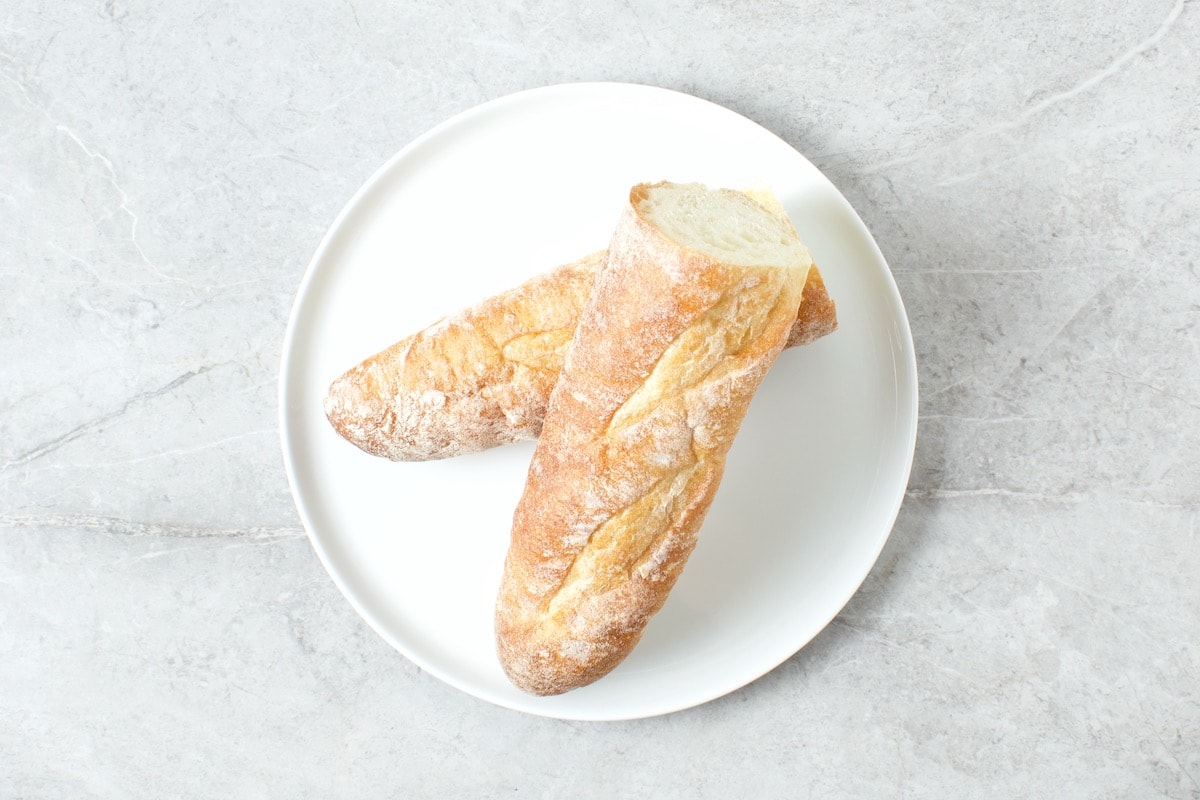 But they tend to go stale pretty quickly.

I wanted to find the best way to revive my French bread, so I experimented with five different reheating methods.

I was looking for one that gave a crunchy outside and a soft, fluffy inside.

The best way to reheat French bread is in the oven. Set your oven to 350°F (180°C). Dampen the crust with a spray of water or run it under the tap. Then wrap it up in foil and place it on the oven rack. Reheat the French bread for 5-10 minutes. Remove the foil for the last 2 minutes to crisp the crust.

I popped into my local bakery and selected the best French bread they had and some old ones from the day before.

Unsurprisingly, a couple of croissants magically found their way into my bag too.

The next day, I grabbed the somewhat hard French bread and began my experiment. I tested reheating the baguettes:

The oven gave me the best results.

The crust was crispy, with the inside light and fluffy – just what I wanted.

The microwaved bread was a little too chewy, but it’s great at softening hard bread.

Reheating French bread in the oven

To reheat your French bread in the oven, set it to 350°F (180°C). Dampen the crust with a spray of water or run it under the tap. Then wrap it up in foil and place it on the oven rack to heat for 5-10 minutes. Uncover the baguette for the last 2 minutes to crisp the crust.

Note: times will vary depending on your oven and the size of your baguette.

How to reheat French bread in the oven:

Don’t be afraid to get your baguette wet.

The moisture will turn to steam in the oven which will help soften the bread.

There is no chance of your baguette coming out soggy (I promise!).

Another option is to place the baguette in a wet paper bag.

Or to place a tray filled with water into the oven while it’s preheating to create a ‘steam oven’.

You can then set the bread directly on the oven rack with no foil.

This was my favorite method.

The baguette came out of the oven with the taste and texture of freshly baked bread.

The crust was crunchy with a deliciously soft inside, working well for both stale and fresh baguettes.

The oven is great for heating from frozen too.

Reheating French bread in the microwave

Reheating your baguette in the microwave is quick and easy. Place your baguette on a microwave-safe plate and cover it with a damp paper towel. Microwave in 15-second intervals until warm. Go slowly. If you overheat the bread, it will turn out hard and dry.

How to reheat French bread in the microwave:

The steam created by the damp paper towel is vital in remoisturizing the baguette but will leave you with a soft crust.

To crisp the crust, consider placing it into a really hot oven for 2-3 minutes after microwaving it.

The bread will go stale very quickly once it starts to cool down, so eat it before this happens.

I recommend using this method if you like a soft crust or if your bread is so stale nothing else will save it.

I thought the crust was slightly chewy, but nothing too bad.

There’s no denying how convenient the microwave is too.

Reheating French bread on the stove

To reheat your French bread on the stove, sprinkle water over the bread or run it under a tap to wet the crust before wrapping it in foil. Place the bread inside a pot and heat it on low heat with a lid. Check if the baguette has warmed through after 10 minutes, and decide if it needs any longer.

How to reheat French bread on the stove:

Use the smallest pot that will fit the baguette.

You’re essentially creating a mini oven, and a smaller space will heat the bread more efficiently than a big pot that’s mostly empty.

A low heat will warm the baguette evenly and means you don’t have to worry about the bottom burning.

The baguette came out warmed through, but the crust was a little soft because there’s no way of crisping it at the end.

Personally, I wouldn’t use this method again unless I didn’t have an oven and really didn’t want to use the microwave.

Reheating French bread under the broiler

Reheat your French bread under the broiler by cutting it in half or into slices. Butter the slices and broil on high for 2-3 minutes until the butter has melted. Slice the baguette thinly for crispy toast or nice and thick for a crunchy outside but soft inside.

How to reheat French bread under the broiler:

If you have slices, you can also flip them over to crisp both sides.

Make sure the top of the bread isn’t too close to the broiler, or it might burn.

Line the broiler tray with foil if you don’t want to get any crumbs in it.

Top tip: add some cheese to make cheese on toast!

This method works best if your baguette isn’t too stale.

Stale bread will just get very dry (although being liberal with the butter helps).

The final result was super tasty because the butter soaked into the bread, and I enjoyed the crispy texture on the top.

Reheating French bread in the toaster

What to do with stale French bread

If you’ve got a rock-hard French bread, don’t throw it out, there are lots of options.

Here are some ideas for turning your stale bread into something delicious.

Who knew there were so many ways to use up old baguettes!

How to store French bread

To store your French bread, wrap it tightly with foil or plastic wrap. Or wrap the baguette in a dishcloth before storing it in an airtight container with the lid left a little ajar. Wrapping the bread in foil or plastic keeps it fresher for longer, but the crust will go soft. The second option keeps the crust crunchy.

If you have a bread basket – then use that!

French bread will stay good for about 3 days on your counter,

If you want to keep it longer than that, I recommend freezing it. Avoid refrigerating the baguette because this will cause it to go stale faster.

Related: How To Store Focaccia Bread

Storing bread is a compromise between keeping it from going stale too quickly and keeping some crisp in the crust.

The dishcloth and airtight container set up allows some airflow so the crust won’t get too soft, but the bread will go stale quicker than if you stored it in something completely airtight.

If you baked your own French baguette, cool it to room temperature before storing it, or it’ll get soggy.

Can you freeze French bread?

Freezing French bread is a great way to keep them from going stale. Freezing halts the staling process, so the bread will still feel and taste fresh when you reheat it. French bread will last for up to 6 months in the freezer before the quality starts to decline.

How to freeze French bread:

Another option for freezing slices is to flash freeze them by spreading them out on a baking tray and freezing them for 1-2 hours.

You can then place the slices into a freezer bag, remove as much air as possible and seal it.

This makes it easy to pull out a slice or two whenever you need them.

Slices stored separately like that are more susceptible to freezer burn, so they won’t last as long.

How to thaw and reheat frozen French bread

The best way to thaw and reheat a frozen baguette is to skip the thawing and heat it straight from frozen. Wrap it in foil and heat it in a 350°F (180°C) oven for around 15 minutes (less for slices). You can also simply microwave the baguette for about 30 seconds, but the crust will be soft.

If you have slices, you can use the toaster for a quick thaw.

Read Next: How To Reheat Croissants 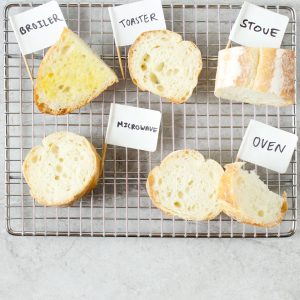 Exactly How To Reheat French Bread

Don’t be afraid to get your baguette wet. The moisture will turn to steam in the oven which will help soften the bread. There is no chance of your baguette coming out soggy (I promise!). Another option is to place the baguette in a wet paper bag. Or to place a tray filled with water into the oven while it’s preheating to create a ‘steam oven’. You can then set the bread directly on the oven rack with no foil.