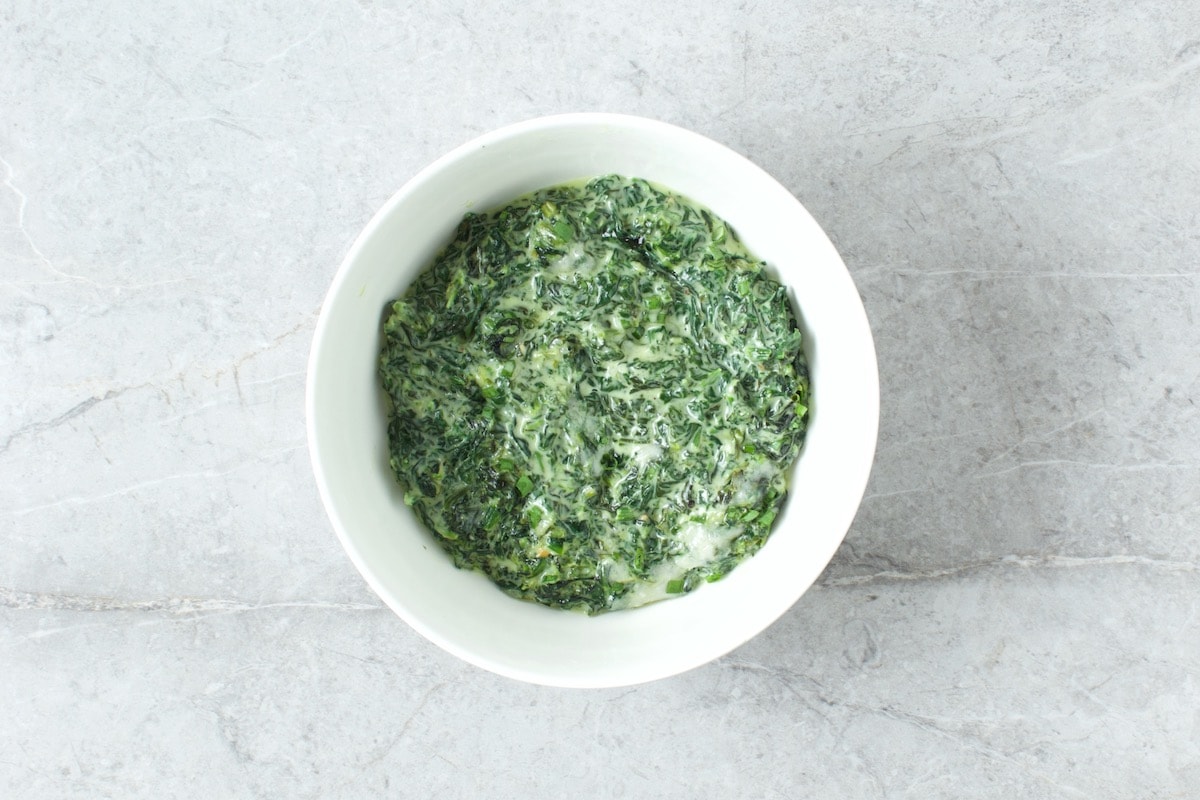 Creamed spinach is a delicious addition to most meals.

But reheating it can be a tricky affair.

It doesn’t respond well to harsh heat and requires a delicate touch to keep its silky-smooth texture.

I’ve also included some tips on how to store and freeze your creamed spinach, to keep it as good as new.

The best way to reheat creamed spinach is on the stove. Take your creamed spinach directly from the fridge and scoop into a cold pan. Reheat the spinach slowly on a low heat, stirring frequently until hot. Optionally add a few tablespoons of milk or cream to help it regain its smooth, silky texture.

I prepared a super tasty pot of creamed spinach and popped it into the fridge overnight.

The following day, I portioned it out and set about testing each reheating method.

I tried the following methods:

I would recommend the stove or the double boiler for good, consistent results.

The microwave worked well for single portions and is a quick and convenient way to reheat your creamed spinach.

The oven worked okay, but it’s a little slow compared to the other methods.

Tip: The creamed spinach may have thickened a bit in storage, so be ready to add some extra liquid in while it’s reheating.

Cream is best, but milk, stock, or even water will do.

Reheating creamed spinach on the stove

To reheat creamed spinach on the stove, take it directly from the fridge and scoop into a cold pan. Warm the spinach slowly, on low heat, stirring the spinach frequently until it warms through. If the creamed spinach has dried out, add a few tablespoons of milk or cream to help it regain its smooth, silky texture.

How to reheat creamed spinach on the stove:

Creamed spinach is a delicate dish that needs to be treated with care.

Stir it frequently to keep the sauce from catching on the bottom of the pan, but don’t stir too vigorously so you don’t tear all the spinach.

Keep the heat low so you don’t overcook the spinach or split the sauce, which could leave you with a really watery dish.

If you need extra moisture but don’t have any milk or cream, water or stock will do in a pinch.

I got great results from heating my creamed spinach on the stove.

It was easy to control the temperature, and I could add in extra liquid as soon as I thought the spinach needed it.

The final result was creamy and smooth.

However, you may struggle to find a small enough pan if you’re only reheating one portion for yourself.

Reheating creamed spinach in the microwave

Put your creamed spinach in a microwave-safe dish. Add a little extra cream or milk to loosen the sauce. To keep the moisture in, cover the dish with a damp paper towel or some plastic wrap. Heat the creamed spinach in 30-second intervals at 50% power, stirring it during each break.

How to reheat creamed spinach in the microwave:

50% power gives you more control over the heating process and means you’re less likely to overheat the spinach.

The microwave is only suitable for smaller portions. A party-sized portion will heat really unevenly, and you’ll probably end up with a split sauce.

I was happy enough with the results of heating my creamed spinach in the microwave.

It was a little watery but okay for just me.

There’s a small risk of overheating the dish, but you can avoid this if you’re careful.

How to reheat creamed spinach in a double boiler:

I’ve given instructions for using a makeshift double boiler, but if you have the real deal, you can use that.

The trick to making it work is to keep at least 2 inches between the water and bowl.

This allows the steam to gently transfer its heat to the spinach.

The creamed spinach heated perfectly in the double boiler, but I found it slower than the stove, which also worked well.

I’d only recommend using it over the stove if you have a small portion and no small pots or pans.

Reheating creamed spinach in the oven

To reheat creamed spinach in the oven, preheat it to 300°F (150°C). Transfer the spinach to a shallow baking dish and add 1-2 tablespoons of liquid (milk, water, stock, or cream) per portion. Tightly cover the baking dish with a piece of foil and heat for 5-10 minutes, stirring halfway through.

Note: times will vary depending on how much creamed spinach you’re reheating and the type of oven you have. Toaster ovens will be much quicker than conventional ovens.

How to reheat creamed spinach in the oven:

Use a shallow dish and spread the creamed spinach out evenly – this will help it heat faster.

I like to remove the foil for the last 2-3 minutes of heating and sprinkle some grated cheese over the top of the spinach. This elevates the dish to a whole new level.

I wasn’t crazy about this method of reheating creamed spinach because it wasn’t that easy to check on its progress, which meant I was worried it was overheating.

When I checked on the dip at the halfway mark, it looked a little greasy, but the sauce came back together.

In short, okay, but pick another method if you can.

How to store creamed spinach

Allowing the creamed spinach to cool down before putting it in an airtight container avoids water from condensation building up inside.

Although creamed spinach is already a soggy dish, excess water will contribute to the premature deterioration of the sauce.

If you have a lot of creamed spinach to cool quickly, I recommend splitting the dish up into smaller containers so the heat can escape more easily.

You can also place the pot in a cold water bath in the sink.

Can you freeze creamed spinach?

Yes, creamed spinach freezes well. Just be prepared to add in some extra cream when you’re reheating it to bring the velvety consistency back. Creamed spinach will be at best quality for up to 3 months in the freezer, but I try to use it as soon as possible.

How to freeze creamed spinach:

Allow the creamed spinach to cool down before putting it in the freezer.

This will prevent any ice crystals from forming in the spinach and ruining its texture.

I prefer to use freezer bags over airtight containers because they’re really space efficient in the freezer.

A thinner block of creamed spinach also thaws faster than a more compact block, like you’d get in an airtight container.

How to thaw and reheat frozen creamed spinach

Once thawed, reheat the creamed spinach in the microwave or in a pan on the stove. 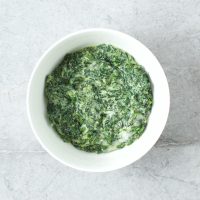 Exactly How To Reheat Creamed Spinach

Creamed spinach is a delicate dish that needs to be treated with care. Stir it frequently to keep the sauce from catching on the bottom of the pan, but don’t stir too vigorously so you don’t tear all the spinach. Keep the heat low so you don’t overcook the spinach or split the sauce, which could leave you with a really watery dish. If you need extra moisture but don’t have any milk or cream, water or stock will do in a pinch.