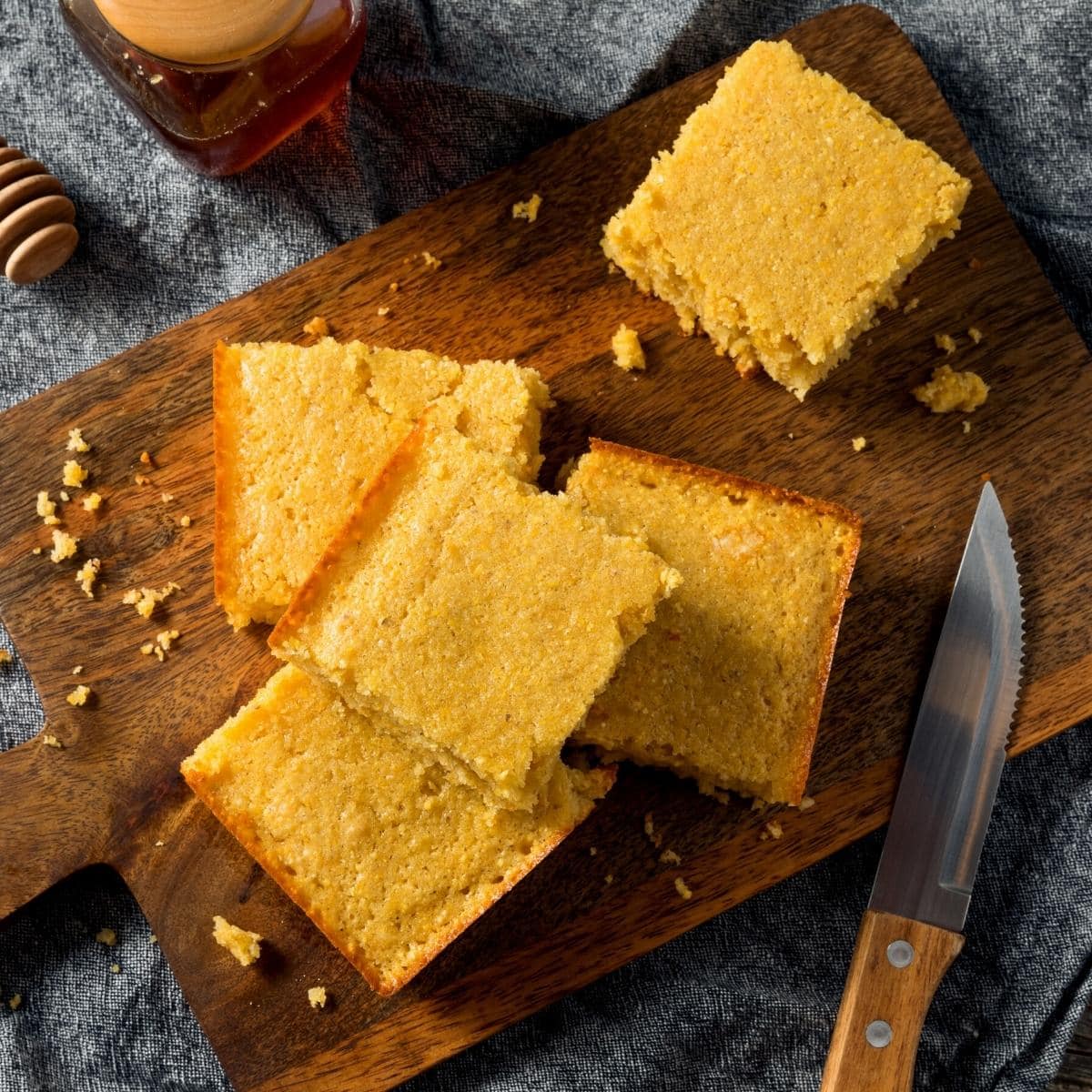 Cornbread is so moreish that it’s hard to imagine having leftovers.

But if there is, what do you do with them?

In this article, I show you the very best way to reheat your cornbread, as well as giving you some tips on storing it.

With half a tray of cornbread left to experiment with, I tested the following reheating methods:

The oven and the stove were my favorite options.

The air fryer works best if you treat it like a mini oven.

And I’d avoid using the microwave unless your cornbread is really stale because it can come out mushy.

Reheating cornbread in the oven

How to reheat cornbread in the oven:

The added water or butter will steam in the oven and re-moisturize the cornbread. If you want to get a crispy top, remove the foil for the last few minutes of heating.

Note: if you’re using a toaster oven, then the cornbread will heat more quickly.

This was a great method for reheating lots of cornbread at once, but a little slow for just one or two slices.

Overall, the results were very consistent and you’re guaranteed some yummy cornbread!

Reheating cornbread in the microwave

To reheat cornbread in the microwave, cover a slice with a damp paper towel and place it on a microwave-safe dish. Heat the cornbread in 15-second intervals, being careful not to over-microwave it. Otherwise, you’ll end up with very stale cornbread.

How to reheat cornbread in the microwave:

I always cover rather than wrap my cornbread in a damp paper towel, because otherwise, you risk a soggy bottom.

And 15 seconds may seem pretty short, but the cornbread will heat quickly and you don’t want to accidentally overdo it.

The microwave was super quick and the cornbread came out really moist, so moist in fact I found it a bit mushy.

If you have extra stale cornbread, this is a great way to revitalize it.

Reheating cornbread on the stove

To reheat cornbread on the stove, heat a pan over medium heat, melting just enough butter to lightly coat the bottom. When the butter is bubbling, add your cornbread slices. Heat the cornbread on each side for 2 minutes. Checking regularly to make sure it’s not burning.

How to reheat cornbread on the stove:

If you don’t want to use butter, oil will do but don’t use too much or you’ll end up with greasy cornbread.

And resist the temptation to speed things up by using a high heat – high heat will burn the butter and potentially the cornbread too.

Tip: if the cornbread is a bit stale, add a splash of water to the pan and cover it with a lid for 2 minutes. This will create steam that should rehydrate the cornbread.

I really liked this method!

It was quick, and the cornbread had a nice crisp outside with a soft, fluffy inside.

The only downside was the extra washing up afterwards, and the fact it’s not suitable for larger portions.

Reheating cornbread in the air fryer

How to reheat cornbread in the air fryer:

Thicker slices will end up burning on the outside before the inside has warmed through.

If the cornbread is already pretty dry, sprinkle it with some water before putting it in the air fryer to help make sure it doesn’t dry out any further.

This is a good method if you have fresh cornbread, the slices heat through quickly.

But it’s not that great for stale cornbread because it’s quite a dry heat (you could use foil to protect the cornbread though!).

How to store cornbread

The best way to store cornbread is to let it cool and then wrap it in plastic wrap or aluminum foil at room temperature. Stored in this way, your cornbread will last for between one and two days. Do not refrigerate cornbread because this makes it go stale faster.

Letting the cornbread cool to room temperature first will prevent condensation from forming on the plastic wrapping, which could then drip into the cornbread and make it soggy.

The plastic wrap protects the cornbread from the surrounding air and slows down the staling process.

Can you freeze cornbread?

Cornbread freezes really well and is the recommended storage method if you plan to keep the cornbread for more than a few days. A well-wrapped cornbread will last for 3-4 months in the freezer. It’s best to freeze smaller portions so that you don’t have to thaw more than you need.

How to freeze cornbread

The double wrapping will ensure the cornbread is well protected from the hard freezer air and will remove any risk of freezer burn.

How to thaw and reheat frozen cornbread

To thaw the frozen cornbread, leave it out on a counter at room temperature for a few hours. Place the slices of cornbread on top of a paper towel to soak up any moisture so that it doesn’t go soggy. Once thawed, you can reheat it in the oven, microwave, or in a skillet on the stove.

What to do with leftover cornbread

Leftover cornbread is great to have because you can use it for pretty much any meal!

Here are some yummy ideas for using up your leftover cornbread. 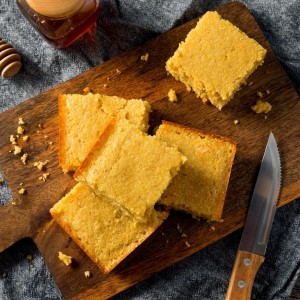 Exactly How To Reheat Cornbread

The added water or butter will steam in the oven and re-moisturize the cornbread. If you want to get a crispy top, remove the foil for the last few minutes of heating. Note: if you’re using a toaster oven, then the cornbread will heat more quickly. 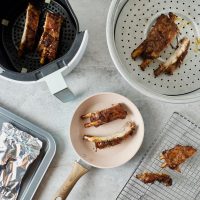