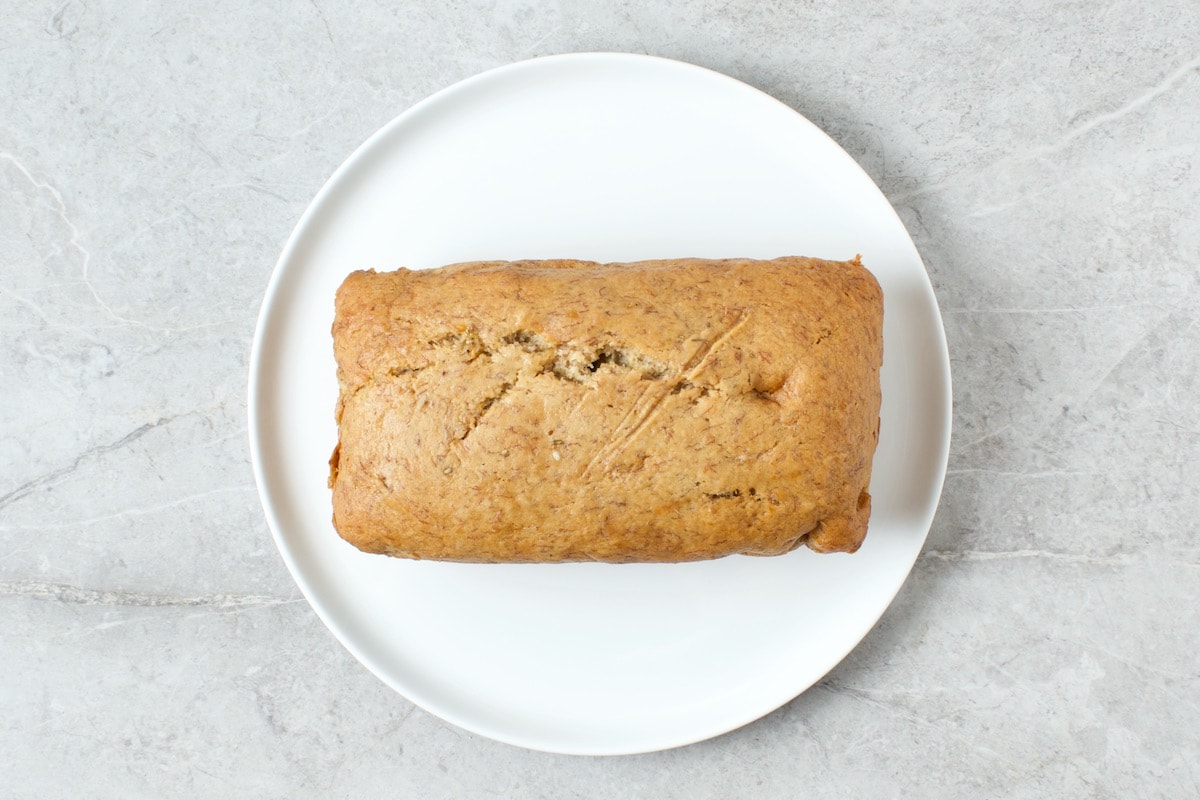 You think so too or you wouldn’t be here!

But what’s the best way to reheat banana bread so it stays moist and fresh?

I tested six different methods to find out, and I share my secrets below.

I’ve also included some tips on how to store and freeze your banana bread for maximum freshness.

I’ve become somewhat of a pro at baking banana bread, so I quickly baked a loaf for my experiments.

After leaving the banana bread overnight, I tested reheating it with the following methods:

The skillet was my favorite method – but it’s not the healthiest.

If your banana bread is dry and stale, the microwave can work wonders.

Reheating banana bread in the oven

Preheat the oven to 350°F (180°C). For slices of banana bread, lightly butter a baking tray and spread them out. Cover the banana bread with foil and heat slices for 5-10 minutes. A whole loaf will require at least 15-20 minutes. Remove the foil for the last minute or two to allow the banana bread to crisp a bit.

Timings will vary depending on how warm you want the banana bread and what type of oven you’re using.

How to reheat banana bread in the oven:

If you prefer not to use butter on the baking tray, lining it with parchment paper works just as well.

If your banana bread is on the dry side, sprinkling some water over it before covering it with foil will help create a little steam and moisten the bread.

Sometimes I do this even if the banana bread is still pretty fresh.

The banana bread came out pretty soft and tasted good.

A big advantage of the oven is its reliability, the banana bread will come out similarly every time.

If you only have a big oven, it can be a bit slow and not worth it unless you have multiple slices.

If you’re using the smaller toaster oven, then it’s much quicker. So, it’s good for 1-2 slices.

Reheating banana bread in the microwave

Place slices of banana bread on a microwave-safe plate. Cover the slices with a damp paper towel. Microwave on high for 10 seconds and then heat for a further 10 seconds if needed. Serve and eat the banana bread as soon as possible because it will dry out again quickly.

How to reheat banana bread in the microwave:

The damp paper towel is super important and will help keep the banana bread moist and fluffy.

Baked goods get stale very quickly after they’ve been microwaved, so once the banana bread is warm, eat it straight away!

It will taste similar to cardboard when it’s cold (I’m not joking).

The microwave is great at reviving the texture of stale banana bread and softening it if it’s gone hard.

It’s also super quick, but I missed the slightly crisp exterior that the other methods gave me.

With the microwave, the only texture was soft.

Reheating banana bread in a skillet

Put a skillet on the stove and heat over medium-high heat. Melt a little butter in the pan. Once the pan is hot, add a slice of banana bread and heat it for 2 minutes. Flip the slice over and heat for a further two minutes or until it’s crisp and heated through.

How to reheat banana bread in a skillet:

Keep the slices relatively thin to allow the heat to penetrate through the banana bread before the outside burns.

The melted butter in the pan soaks into the banana bread, which helps to keep it moist.

If you feel the banana bread would benefit from some extra moisture, sprinkle some water around the outside of the pan and cover it with a lid (or a piece of foil).

This will ‘steam’ the banana bread and help soften it.

This was a super delicious method.

The butter crisped up the outside of the slice perfectly, and the inside was soft and moist.

The only bad thing was having to wash the pan up afterward!

Reheating banana bread in the toaster

How to reheat banana bread in the toaster:

Never spread any butter or jam on your slices of banana bread before putting them in the toaster.

The spread can drip into the bottom of the toaster and potentially create a fire hazard.

Tap the banana bread on the counter before putting it in the toaster to get rid of any loose crumbs – then you won’t end up with the dreaded burning smell every time you toast something!

The toaster gave the outside of my banana bread a nice crisp, and it was really quick.

Perfect for a quick snack, or if you’re not in your own kitchen.

The only downside for me was that the slices had to fit in the toaster, so they were thinner than I would typically cut them.

I prefer a nice thick wedge of banana bread.

How to store banana bread

It’s best to store the whole banana bread loaf and only slice what you need.

Slices will lose their moisture faster than a whole loaf.

The plastic wrap will restrict airflow to the banana bread and keep it fresh, while the paper towels will absorb any excess moisture to prevent soggy banana bread.

If you don’t want to use plastic wrap, you can use an airtight container or a sealable freezer bag instead.

Ensure the banana bread is cool before storing it.

If the bread is still warm, condensation will build up in the container leaving you with mushy, wet banana bread.

Related: Can You Save Half A Banana

Can you freeze banana bread?

Banana bread freezes well for up to 3 months. You can freeze a whole loaf or slices. A whole loaf will last longer but will take longer to thaw. Slices are very convenient. Freezing halts the staling process, so when you thaw the banana bread, it will be just as fresh as when you froze it.

How to freeze banana bread:

Another option for freezing slices is to spread them out on a baking tray and freeze them uncovered for 2-3 hours first.

Once frozen solid, you can place them in a freezer bag (removing the air before you seal it).

The most important thing with freezing is eliminating any air from the packaging.

Direct exposure to cold air in the freezer causes freezer burn, which will ruin the taste of your banana bread. 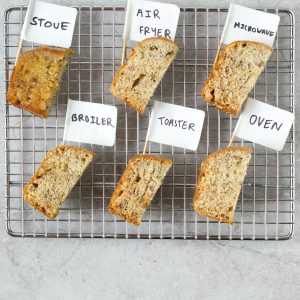 Exactly How To Reheat Banana Bread