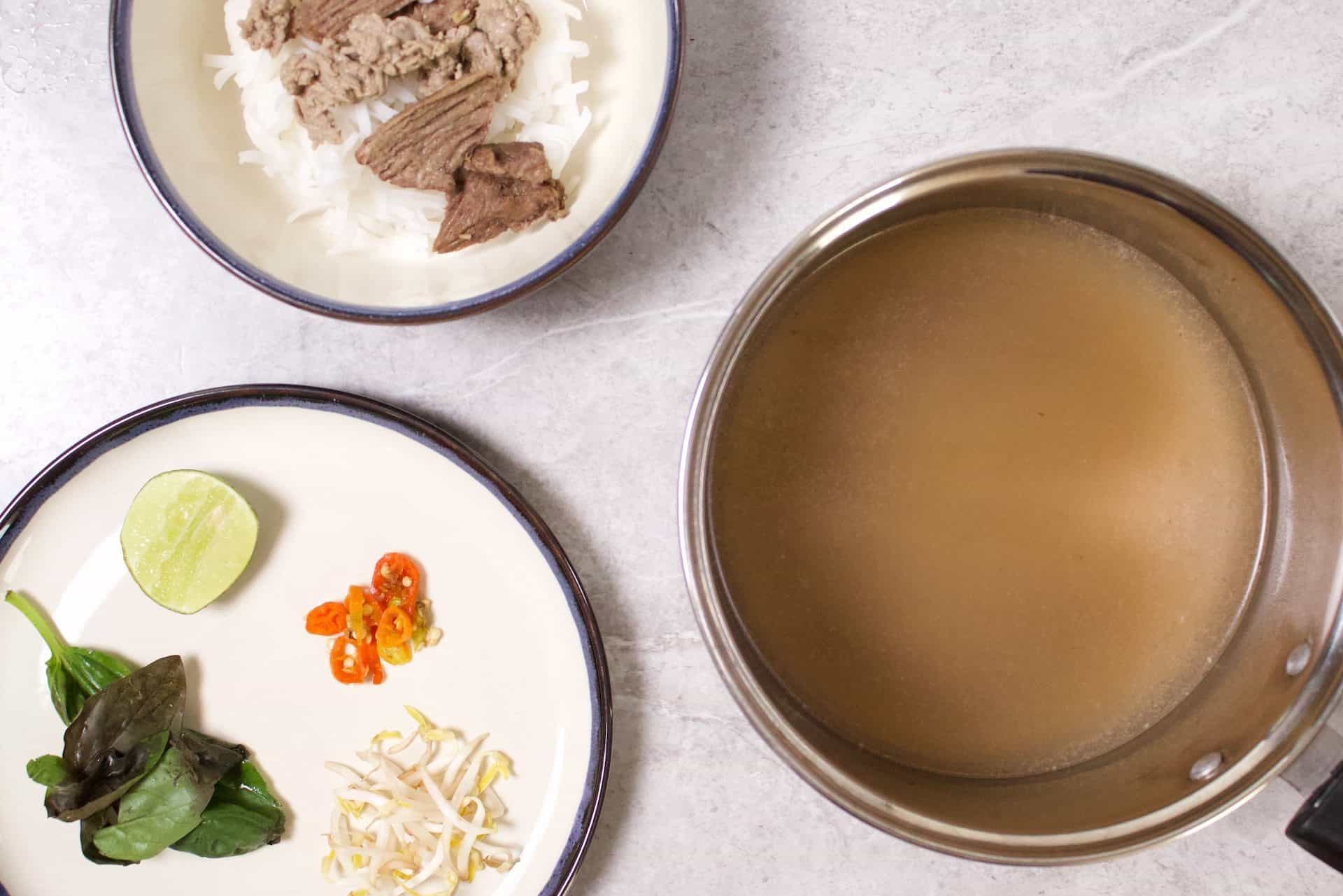 If you’ve recently indulged in a delicious bowl of pho, you may have a little (or a lot) leftover.

If so, you may be wondering if you can salvage the remains and reheat them later. The good news is that you can absolutely reheat pho, and I have tried several methods to find out what gives the best results.

The bad news is that pho does not keep well when all of the ingredients are still combined in the broth. But fear not, I explain how you can separate and re-assemble your pho so it’s almost as good as new.

In this article, I cover:

How to reheat pho

Mainly because the noodles go a little mushy. But also because after you add all the garnishes and sauce into the broth, its taste changes, and it’s no longer ‘fresh’ pho.

But don’t let that stop you! I reheat pho all the time and it works out fine.

There are two main ways to reheat pho:

Neither of them is better than the other, so use whichever one is convenient for you.

My instructions assume that your pho is separate, so the broth and the noodles/meat/veggies are in individual containers (and the noodles are cooked). But if you’ve already assembled your pho or only have broth, you can easily adapt the methods.

Similar To Pho: How To Reheat Miso Soup

How to reheat pho in the microwave

To reheat pho in the microwave, pour the broth into a microwave-safe bowl and cover it with some perforated plastic wrap. Reheat the pho broth until it’s boiling hot (2-3 minutes). Then pour the broth over your noodles and meat and wait 10 minutes for the noodles to separate.

It’s really important you wait until the broth is boiling to pour it over the noodles. Otherwise, it might not be hot enough to unstick the noodles and warm the other ingredients in your pho.

I always let my noodles and meat come up to room temperature before pouring the broth over because if they’re straight out of the fridge, they can cool the broth down too much.

If your noodles are really stuck together, I recommend microwaving them separately to the broth for 30 seconds with a damp paper towel covering them. The resultant steam will help loosen them up. You can do this even if they’re mixed in with the meat.

Another method is to just put everything in a bowl and microwave it together. However, because the broth takes a while to heat up, you risk overcooking your meat or veggies by zapping them for too long.

How to reheat pho on the stove

Don’t be tempted to pour the broth over your noodles until it’s boiling. If the broth isn’t hot enough, the noodles won’t separate.

Take the noodles and the meat out of the fridge at the same time as the broth so they can come to room temperature while the broth is boiling. This will ensure they don’t cool the broth down too much when you pour it over.

How to heat up take out pho

99% of takeout pho will come separated. The broth, meat, noodles, and garnishes will all be in different containers.

It comes this way to prevent the noodles from becoming mushy and to make sure your meat and garnishes aren’t overcooked.

Warning: some of the meat might come raw, but don’t be alarmed!

It’s supposed to be raw (unless it’s chicken, then you have a problem).

In the restaurant, the chef would pour boiling hot pho broth over the noodles and raw meat, and this would be enough to cook the meat and separate the noodles.

You need to recreate this at home.

If your pho broth isn’t boiling hot when you get it home, you need to heat it up. Lukewarm pho won’t be enough to cook the meat and the noodles.

If the noodles or the cooked meat are cold (i.e, if you’ve just got them out of the fridge), I would heat them in the microwave for around 15 seconds to warm them up. If they’re too cold, they will cool down the broth when you pour it over.

How to store leftover pho

Store the pho broth separately from any leftover solids. Separate them using a sieve and keep the different components in separate airtight containers in the refrigerator. The broth will last 6-7 days, while the noodles and meat will last 2 days. You can also freeze the broth for up to 6 months.

As soon as you’ve realized you’re not going to finish your bowl of pho, take the noodles out (or eat them all and just leave the broth).

The sooner you remove the noodles from the broth, the better. The only way to store pho is with the liquid and the solid components separated.

Why do you need to separate the noodles from the broth?

Every second the noodles are in the broth, they’re absorbing liquid and becoming mushier. Eventually, certain noodles will completely disintegrate!

How to store leftover pho broth

Pho broth will keep in the fridge for 6-7 days in an airtight container as long as you remove all the solids. I recommend using a sieve so you can get all of the smaller bits out as well. Any solids left in the broth will reduce its shelf life. You can also freeze the broth for up to 6 months.

You want the broth to be room temperature before you store it, but it’s not a good idea to leave the broth out cooling for more than two hours.

If you have a big batch of broth, you can speed up the cooling process by putting a few ice cubes in the broth. Or you can fill your sink with cold water and put the saucepan in it.

You can also freeze the pho broth.

Portion the broth out and put each portion into a heavy-duty freezer bag. It’s a little fiddly, but bags are better than containers because you can lay them flat in the freezer and save loads of space.

Remember to leave a little bit of space in the bag for expansion. The broth will expand as it freezes, and you don’t want the freezer bag to burst!

Note: if you cook a lot of pho, I recommend reusable freezer bags to cut down your plastic waste.

If you don’t want to use individual containers, a good trick is to freeze the pho in an ice cube tray and transfer the frozen cubes to a big airtight container. The pho ice cubes won’t stick together, so you’re able to take as many or as little as you want each time.

How to store leftover pho rice noodles and meat

Put the noodles, meat, and garnishes in a separate airtight container to the broth and keep it in the fridge. The leftovers will last up to 2 days but aim to use them as soon as possible. Ensure the noodles are cool and dry before you store them because excess moisture will leave them soggy.

Some people like to separate the meat from the noodles, but I find that keeping them mixed prevents the rice noodles from sticking together too much.

If the texture of the noodles is already overly mushy, I would advise either eating them or throwing them away. The mushiness will only get worse in the fridge. You can still keep the leftover broth and meat and add fresh rice noodles when you want to eat the leftovers.

You could also freeze the leftover rice noodles and meat. Put them in a heavy-duty freezer bag and squeeze as much air out as you can to prevent freezer burn. The mixture will last up to a month in the freezer.

Related: How To Store, Freeze, And Reheat Rice Noodles

However, you might notice a texture change with the noodles after freezing. Most of the time, it’s best to cut your losses and use fresh meat/noodles/veggies with leftover broth rather than freezing them.

Can you freeze pho?

You can’t freeze pho with the noodles mixed in with the sauce. The noodles will become horrible and mushy when you thaw the pho. But you can freeze the components of pho separately. The broth is the most freezer-friendly pho component and will last for up to 6 months in the freezer.

The rice noodles and any veggies are less freezer-friendly. Some people will say never freeze these because the texture will take a turn for the worse. However, I’ve had good success freezing rice noodles, so I would definitely try to freeze them if you have a load leftover.

Can you eat pho cold?

Pho is a dish that is supposed to be served boiling hot because the hot broth separates the rice noodles and cooks (or warms) the meat. Cold pho can also have a greasy texture because of all the fatty components in the broth, so I wouldn’t recommend eating it cold.

That said, pho is a dish meant for customizing, so if you’re enjoying your cold pho, go ahead and eat it! 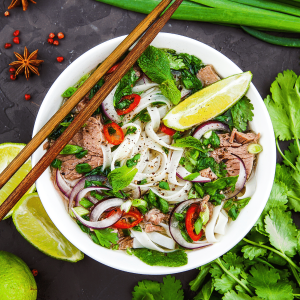 The BEST Way To Reheat Pho

If you’ve recently indulged in a delicious bowl of pho, you may have a little (or a lot) leftover.If so, you may be wondering if you can salvage the remains and reheat them later. The good news is that you can absolutely reheat pho, and I have tried several methods to find out what gives the best results.
No ratings yet
Print Pin Rate
Course: Main Course
Cuisine: Vietnamese
Keyword: pho, reheat pho
Prep Time: 5 minutes
Cook Time: 10 minutes
Total Time: 15 minutes
Servings: 1 person
Calories: 450kcal