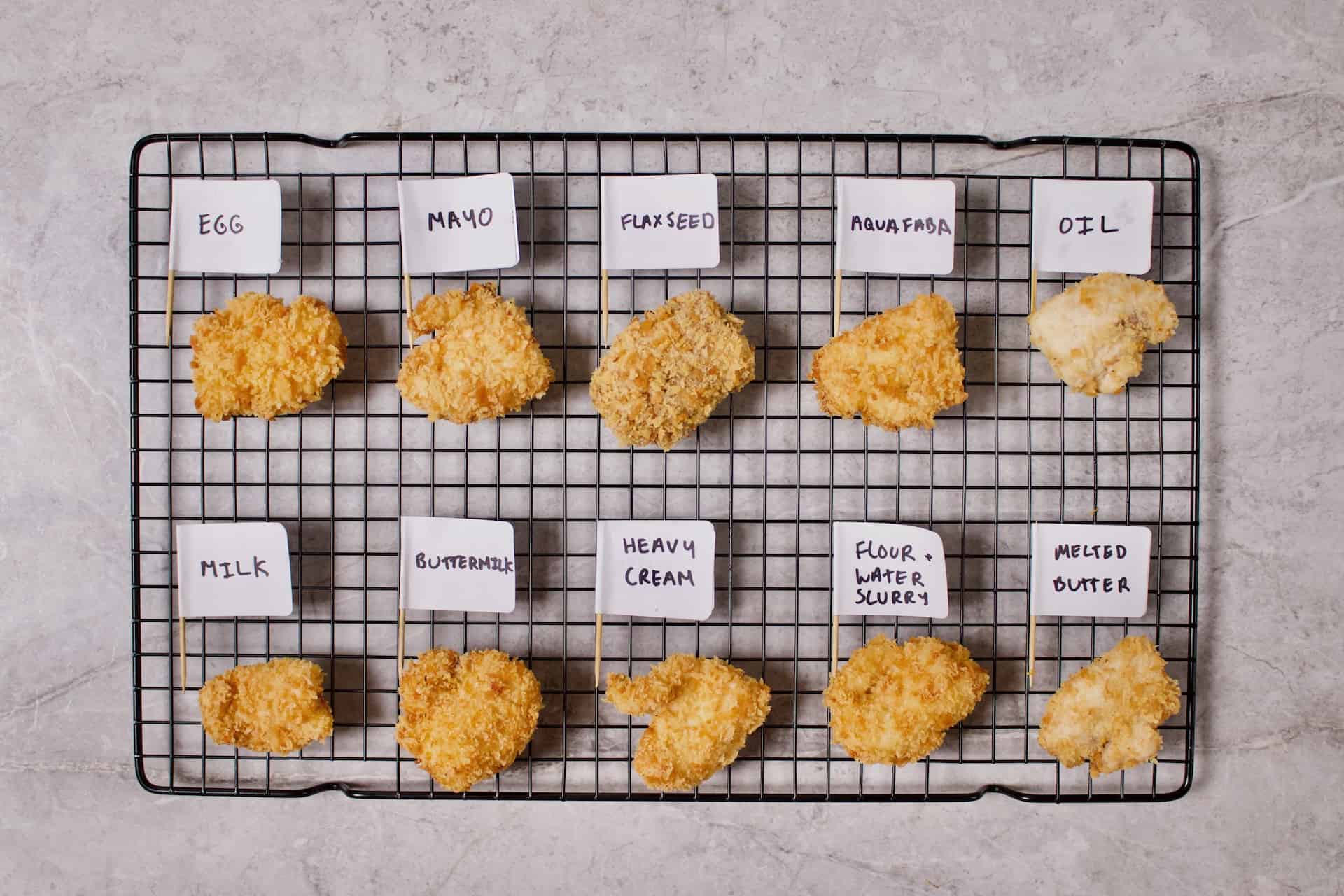 Need a substitute and fast?

I have personally experimented with dozens of egg substitutes for breading and frying chicken, vegetables, tofu, or whatever! This article is a list of the best options.

The best egg substitute for frying is a flour and water slurry. Mix equal parts flour and water in a small bowl and whisk thoroughly. For a lighter consistency, opt for a 2:1 ratio of water to flour. You can also make a slurry using cornstarch, arrowroot powder, chickpea flour, and rice flour.

After spending far too much time researching egg substitutes, I came up with a list of the most promising suggestions and tested them all.

These substitutes are suitable for vegans, people allergic to eggs, or people who have just run out of eggs!

I tested 9 egg substitutes for frying:

Most of these are vegan or can be easily made vegan.

For each substitute, I breaded some chicken and some eggplant (for a representative sample).

First, I dipped the food in flour, then the egg substitute, before coating it in breadcrumbs.

Note: I used breadcrumbs, but the results also apply if you’re breading with flour.

These are the results after frying.

In general, eggplant was harder to coat than chicken because of the texture of the skin.

So the differences in the results were more apparent in the eggplant tests. There was much less in it with the chicken.

Here’s a table summarising the results. If you want more detail, I go through each option below.

Remember, you don’t need to stick to one thing.

You can mix the ingredients, for example, you can thicken milk with a spoonful of mayonnaise or mustard, which will help give a thicker coating.

I liked this option because it didn’t require any extra ingredients.

I was already using flour, and water is free-flowing from the tap.

Another positive is that you can make the slurry as thin or thick as you like. I used a 1:1 ratio of flour and water, and it was a little thicker than heavy cream.

This gave a heavy coating. For more delicate foods like fish, I would add more water.

All of these work well. You can also substitute water for milk.

Make sure there aren’t any lumps!

Overall I think this is a great option, one of the best.

Really convenient and perfect if you need a solution right now.

The breading stuck well and had lots of crunch. It was the crunchiest of all the methods for both the eggplant and the chicken.

The coating was significantly heavier than the other options, but you can always thin the slurry out with more water or milk.

A flaxseed-water mix is commonly used as an egg substitute in vegan cooking and baking, so it’s no surprise it made my list.

When you mix flaxseed with water, it turns into a gel-like liquid similar to a whisked egg.

To replace one egg, the recommended ratio is one tablespoon of flax seeds (or 2 ½ teaspoons of ground flaxseed) and three tablespoons of water. Stir the mixture, then let it rest for 5 minutes to thicken.

If you think it’s too thick, you can thin it out with some more water and vice versa.

You want it to have the consistency of whisked eggs.

It’s best to use ground flaxseed. You can grind your own in a coffee or spice grinder. But I usually opt for the pre-ground stuff.

Chia seeds also work (the ratios are the same). Ground chia works best, but I’ve seen others say they’ve had success with whole chia seeds, so if that’s your only option – go for it.

Another option that would give similar results to flaxseed is to buy a vegan egg substitute (the one I linked to is excellent).

The texture of the flaxseed mixture was so similar to eggs it was a little scary. The bread stuck amazingly, and the crunch was on par with using eggs.

However, the flaxseeds did give the breading a slightly nutty taste. I liked the taste, but not everyone will.

The color of the breading was also affected. It went slightly darker in color and was more brown than orange – similar to a southern fried crust.

The coating was easy to apply, but I recommend shaking the food before you drip it in the breadcrumbs to ensure the layer isn’t too thick.

Milk is a super convenient substitute because it’s something most people will already have in their house.

You can use any type of milk, cows or plant milk.

Just remember to check you’re not using sweetened or flavored milk because this will give the final product a weird taste!

The milk was a little thin, so it didn’t manage to bread the shiny skin of the eggplant.

But it worked better for the chicken and gave a nice crunchy coating. The coating was still thin, but sometimes less is more!

If you want a thicker coating, or you’re breading something hard to adhere to, I suggest thickening the milk with a spoonful of yogurt or a sauce like mayonnaise.

Or add some vinegar or lemon juice to make buttermilk. You could also use a thickening agent (e.g. cornstarch).

Aquafaba is the gloopy liquid found in a can of chickpeas, and it makes an excellent egg replacement.

It’s most commonly used to replace egg whites because it whips up in stiff peaks just like egg whites.

But I didn’t see any reason it couldn’t work as a binder for breading, so I tried it out.

Best of all – it’s free! As long as you’ll use the chickpeas, the liquid is a bonus. You can freeze the chickpeas if you don’t want to use them within 3-4 days.

Top tip: whisk the aquafaba with a fork before using it to give it a slightly thicker consistency.

The aquafaba worked better for the chicken than it did for the eggplant, but I think that’s because I forgot to whisk it before I coated the eggplant (whoops).

Overall the coating was crunchy and stuck well (apart from on the eggplant skin). It was thinner than some other options, but not too thin.

Not bad for something most people throw away.

Buttermilk is milk that’s been slightly soured. It has a thicker texture than milk, similar to that of thin yogurt.

You can buy it from the shops, or it’s really easy to make at home.

I made my own by taking a cup of milk and adding a tablespoon of lemon juice (you can also use vinegar, any type works, but white vinegar is best).

After 10 minutes in the fridge, the milk will have thickened and be ready to use.

You also use cream of tartar.

For one cup of milk, you need 1 3/4 teaspoons cream of tartar.

First, mix a small amount of milk into the cream of tartar to make a slurry, then add the rest of the milk. This will avoid any lumps.

Tip: some people like to soak their chicken in buttermilk overnight to tenderize the meat and keep it juicy. If you have time, try it out – here’s a recipe.

Because the buttermilk had a thicker texture, it produced a nice full, sturdy coating on both the eggplant and the chicken. Not a patch in sight.

The coating was crispy but not the crispiest.

I think because the breadcrumbs soaked up a bit of the liquid while they were waiting to be fried, they were a little wetter (but not by much!).

Heavy cream comes highly recommended by other internet sources, so I was excited to try it out.

It’s not the healthiest coating, but neither is frying things!

Is there a vegan alternative?

Coconut cream is a good vegan substitute for cream but will impart a taste onto the food.

Heavy cream turned out pretty similar to buttermilk which is no surprise because they’re very similar.

The coating was thickish, complete, and crispy.

But again, it wasn’t as crunchy as some of the other options.

I wouldn’t leave your breading to rest for too long to ensure it doesn’t soak up too much of the cream.

Mayonnaise (or other sauce)

Sauces are an interesting one because you can just take a look in your fridge and see what’s there!

Here are some other sauces you can try:

These are all suggestions I came across. The coating you apply should be thin enough that you don’t taste it, but you might get a hint of the flavor of it, so bear that in mind.

Stay away from sauces with lots of excess sugar because they can burn in the fryer.

The mayonnaise worked okay. The coating was crunchy, but it didn’t feel as stable as some of the others. A few breadcrumbs fell off when I picked it up.

I think this was mainly down to how hard the mayonnaise was to apply quickly and evenly. I had to use my fingers to thoroughly coat the food and make sure there weren’t any big blobs of mayo. This probably resulted in a sub-par coating.

I recommend thinning the sauce you pick out with a small amount of water or milk to fix this.

These are the ones I tested that didn’t turn out so well. I’m not sure why anyone suggests them!

Oil was mentioned a few times on different forums as a good alternative, but it didn’t work at all in my experiment.

The little breading that did stick fell off as soon as the chicken/eggplant hit the frying oil.

I used canola oil, but I can’t see this working with any type of oil.

Melted butter was another option that didn’t work well.

The breading stuck slightly better than it did with oil, but the final outcome was thin and patchy.

There was also a distinct melted butter taste, which I didn’t like.

Another option: batter the chicken instead of breading it

Batters are usually naturally eggless recipes, so you don’t need to worry about finding a substitute.

Breading food relies on the egg to stick dry ingredients to the subject. Batters are inherently wet and don’t need a ‘glue’.

The texture of the batter will be slightly lighter, but you won’t lose any crispiness.

To make a simple batter all you need is:

There are lots of different batter recipes (here’s an example), so feel free to experiment!

Here’s the control eggplant and chicken, breaded with a normal egg/flour/breadcrumb mix. 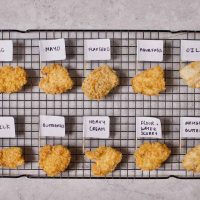 Use a flour/starch and water slurry

Use ground flaxseeds and water

Use milk (animal or plant-based)

Use aquafaba (AKA chickpea liquid)

Use buttermilk (animal or plant-based)

Use mayo (or another sauce) 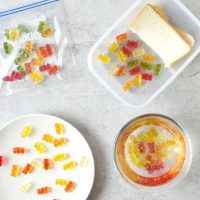 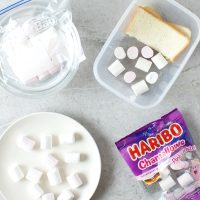 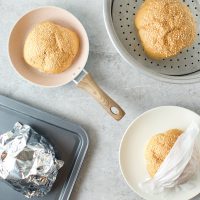 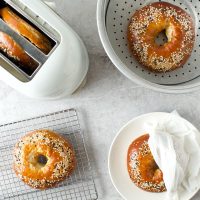